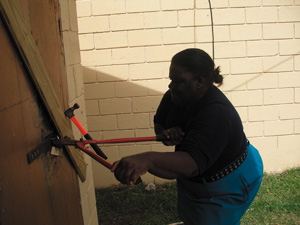 Her Ladyship the Resident Judge Justice Ianthea Leigertwood-Octave on Monday September 3 ordered the Nevis Island Administration and the Nevis Electricity Company Limited (NEVLEC) not to interfere with Ms. Rodney Elliott in the operation of the canteen at the Charlestown Secondary School.

Justice Ianthea Leigertwood-Octave was acting on an application taken to the court by the law firm Daniel Brantley and Associates on the behalf of Ms. Elliott.

In an affidavit sworn and filed by Ms. Elliott on September 3, 2007, Ms. Elliott asserted that she received a letter on the evening of Friday August 31, 2007 signed by Mr. Joseph Wiltshire the Permanent Secretary in the Ministry of Education. Mr. Wiltshire’s letter states “please be advised that permission for you to operate the canteen at the Charlestown Secondary School premises is hereby revoked with immediate effect.  Accordingly, you are to remove all personal possessions from the said facility by August 31, 2007. Further, your debt of $17,535.00(EC) for unpaid rent must be paid by September 30, 2007.”

Ms. Elliott’s affidavit continued that on the morning of September 3, at about 8:30 a.m. a NEVLEC employee came to her to advise her that he was there to cut off her power. She said that she rushed to the NEVLEC office and requested to know how much she owed. She paid the $45.53 she was told was her balance.

According to Ms. Elliott upon her return to the canteen she discovered that the water was disconnected also. She said that she returned down town to the water department and paid the $40.20 she was told was on her balance.

Ms. Elliott attributes her eviction from the canteen to political victimization. She wrote in her affidavit “I believe that all of this is because of my political affiliations with the opposition party. I believe that because I am an ardent supporter of the CCM that I am being victimized by the Nevis Reformation Party lead government.

She said that the government action is, “an attempt to threaten and silence me.”

Miss Elliott said that under the constitution she has a right to freedom of expression and therefore the government’s action is a clear breach of her constitution right.

To bolster her claim of political victimization Ms. Elliott spoke of a conversation she had with the Premier of Nevis, the Honourable Joseph Parry in which she claims Mr. Parry told her that the government could not let her stay at the canteen when “you went on so badly during the election.”