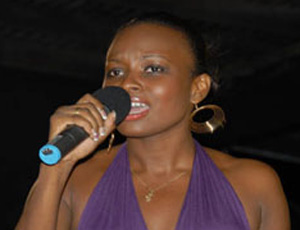 As of last Thursday, Karina Phillip of Keys Village now holds the title Kittitian Superstar. Next was Charlie Miller who captured the 2nd place position. Unfortunately, Yannick Mills and Curdel Mills, who many thought definitely had a place in the top two because of their large fan support, did not place. However, Curdel was adjudged winner of the most online votes.

The show initially began with 24 participants but as the numbers were reduced through the auditions and sing-offs round many were eliminated and four deserving participants entered the finals which were Karina, Charlie, Yannick, and Curdel.

Phillip won two airline tickets sponsored by American Airlines to any destination of her choice along with a laptop, cell phone, free internet and other prizes from Cable & Wireless.  All finalists also received cash prizes.

The show was divided into two segments and Karina chose I just can’t give up now as her first song of choice then  the songbird captured the judges in the second round with I Wanna Dance With Somebody which was uplifted by the accompanying instrumental.

The massive crowd at Carnival Village all cheered for Karina when she hit the stage and began performing the winning song that landed her in first place.

The show’s standard has grown each year since it was first launched in 2005. This year, the show had performances by local artists such as Rapper Niquan and the Stepping Dancers from the Cayon High School.  This year, the show went a little further and introduced regional artiste Miss Claudette Peters, the three times Soca Monarch of Antigua, one of our region’s most well known artist.

St. Clair “Chico” Guishard, creator of the show, told The Observer that although Yannick and Curdel had the most fans throughout the competition, Karina deserved to be the winner.

“Karina performed well and she definitely deserved to be the winner. Most of the audience including myself was shocked when Yannick and Curdel did not place because they had the most fans throughout the competition.  It was like flipping a coin and getting the bottom side up.

“The two on the bottom ended up on top and the two on the top at the bottom. I was totally surprised but looking at her performance I can totally support the judges’ decision,” Guishard said. Karina belted her heart out and got the nod from judges.