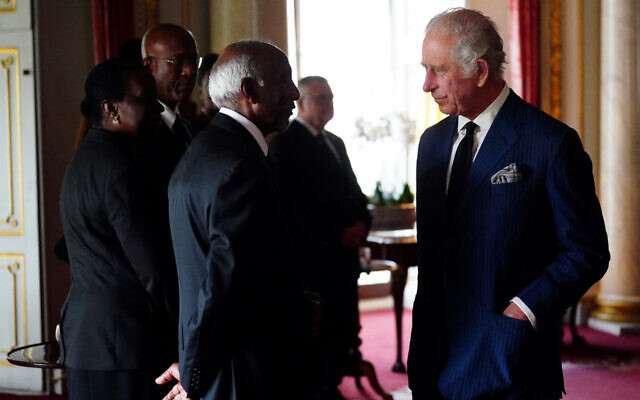 Britain’s King Charles III (R) during a reception with Realm High Commissioners and their spouses in Buckingham Palace, London, on September 11, 2022. (Victoria Jones/Pool/AFP)

AFP — King Charles III hosted his first reception Sunday for representatives of the Commonwealth realms, the 14 former colonies over which he reigns in addition to Britain — at least for now.

With anti-monarchist republican movements gaining ground from Australia to Antigua, one of the 73-year-old’s biggest challenges will be how to keep together the worldwide family that his late mother Queen Elizabeth II so loved.

Commonwealth realms are independent countries that recognize the monarch as a symbolic head of state. If republican movements in the realms have their way, the former colonies would no longer recognize the king as sovereign. Countries can become republics but remain in the 56-nation Commonwealth of Nations, usually referred to as the Commonwealth.

On his third full day as monarch, the king received Patricia Scotland, the secretary general of the Commonwealth, at Buckingham Palace before a reception with realm high commissioners and their spouses.

The Caribbean island nation of Barbados last year became the latest nation to declare itself a republic, and others are heading in that direction.

A sizeable proportion of Australians want to become a republic, including Prime Minister Anthony Albanese, but for now he is focusing on mourning the late queen.

“The important thing is to commemorate the moment that we’re in now,” he told Britain’s Sky News, ruling out a referendum in his first term.

Shortly after Charles was confirmed king of Antigua and Barbuda, Prime Minister Gaston Browne said he intended to hold a republic referendum “within the next three years.”

“This is not an act of hostility or any difference between Antigua and Barbuda and the monarchy, but it is the final step to complete that circle of independence,” he told ITV News.

In Canada republicans are in a minority, but a poll last April found 67 percent opposed Charles succeeding his mother.

Calls for change are also growing in Jamaica, where Prime Minister Andrew Holness told Charles’ son William in March that the nation was “moving on” as an independent country.

William’s tour of the Caribbean with his wife Kate was met with protests and demands for the monarchy to apologize and pay reparations for its role in the slave trade.

The realms are among a total of 56 mostly former British colonies that make up the Commonwealth, a voluntary association covering 2.5 billion people across the globe.

Togo and Gabon became the latest members this year, despite never having been under British rule. 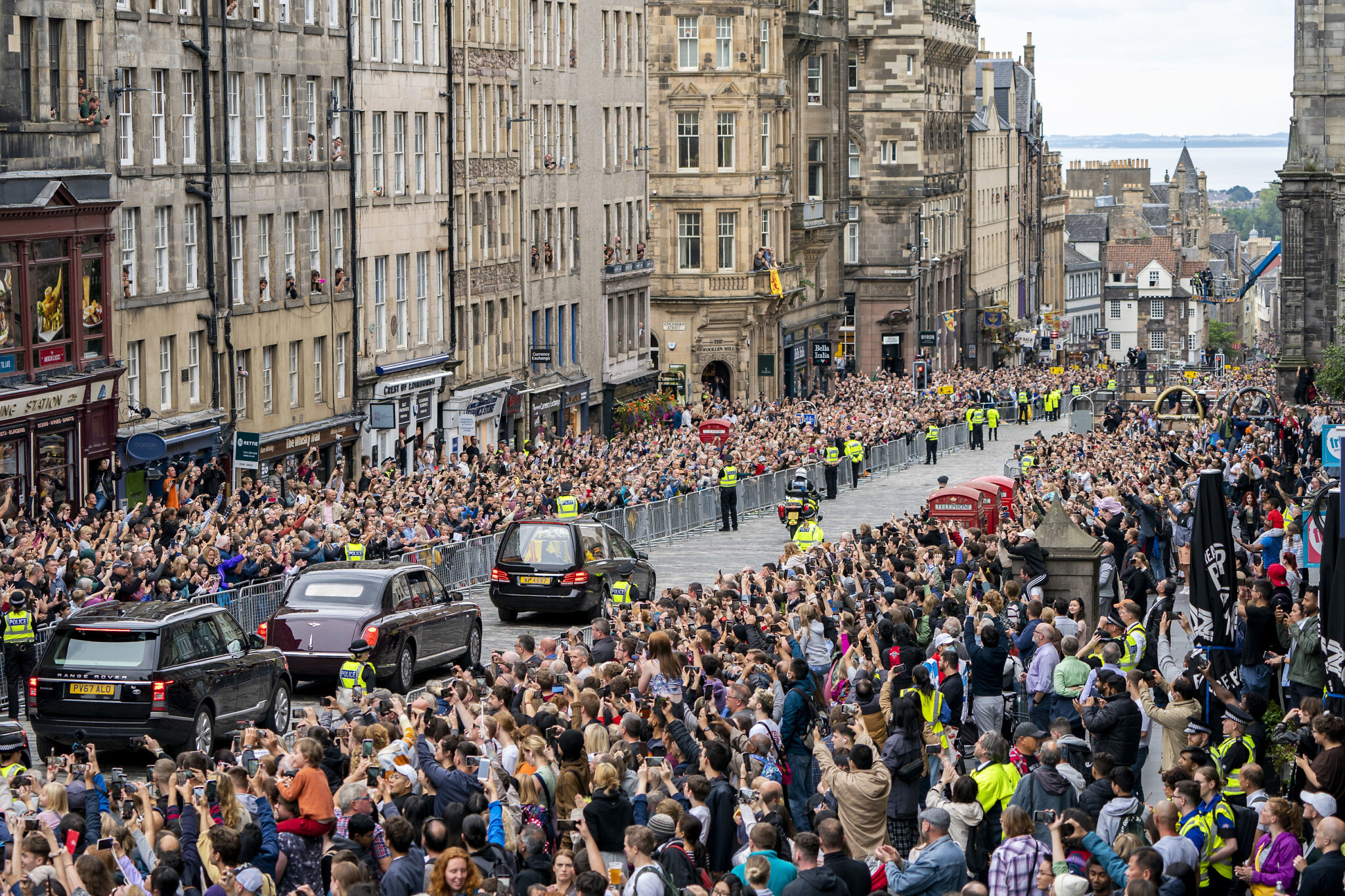 The hearse carrying the coffin of Queen Elizabeth II, draped with the Royal Standard of Scotland, passes on the Royal Mile, Edinburgh, September 11, 2022. (Jane Barlow/Pool Photo via AP)

Most of the others became independent after Queen Elizabeth II took the throne in 1952, and many have since thrown off the monarchy, but she saw the Commonwealth as a way to keep the diverse nations together.

At a summit in 2018, Commonwealth leaders confirmed that Charles would follow her as head of the organization when she died.

He has already laid the groundwork, visiting 45 of the 56 nations so far, and represented his mother at the most recent heads of government summit in Rwanda in June.

There, he addressed the issue of republicanism head on, telling an audience of presidents and prime ministers it was “purely a matter for each member country to decide.”

At the 2013 Sri Lanka summit, where he also stood in for the queen, he recalled a life spent as part of what the Commonwealth “family,” saying it was “in my blood.”

He recalled how former Ghana president Kwame Nkrumah, visiting the queen’s Scottish estate of Balmoral when he was a boy, gave him a bow and set of arrows that he promptly fired off into the trees.

Such ties could help ensure that even if they throw off the monarchy, the realms will stay in the Commonwealth.

Former British prime minister David Cameron remarked that, like his mother, Charles is a “superb diplomat.”

“I saw him in action at Commonwealth heads of government meetings and he knows every leader personally. He interacts with them brilliantly,” he told BBC television.

Times of Israel staff contributed to this report.