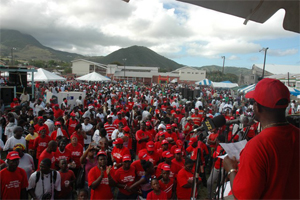 (Basseterre, St. Kitts) – The politics of the just-concluded Labour Day weekend seems to eclipse the historical achievements of the labour movement in the Federation.  But Hon. Dr. Timothy Harris, Chairman of the St. Kitts-Nevis Labour Party does not entirely share this view.

“The Party gave birth to the Union … that historical context is important.  The party came out of agitation which in the particular junction of our history it was illegal and unlawful for trade unions to be formed,” he said.

“Those who were concerned about the squalor in which the worker lived, the inhumane conditions, the lack of rights, the fact that there were no labour standards, they could only do so through the mechanism of a political organisation.”

“That in part explains why in St. Kitts the Labour Day activity which is an internationally acclaimed day for workers had become synonymous with the Labour Party because it was the Labour Party’s politicians who as a result of their political agitation would have pressured the colonial government to bring into being legislation leading to the Union and when the Union was formed given that symbiotic relationship there was a mutual interest in each other’s preservation,” explained Harris.

Based on this context and the similar history of political parties which have strong union ties throughout the Caribbean, Dr. Harris feels that people raise undue alarm and concern that the march is political.

He further explained that the Labour Party is the organisation that mobilizes the people to attend the Labour Day march.  The party does this through the series of public meetings leading up to the march.  The Labour Union, Harris says, is responsible for the logistics of the March, getting the necessary permits or authorisation for the day of the march.

Dr. Harris contends that May is actually Labour Month.  The Labour Party’s Annual Conference is held in May, this year on the eighteenth.  He also announced that the party will hold a Requiem Mass in honour of its stalwarts: Manchester, Bradshaw, Southwell, France and others.  The party and union also pay tribute to the stalwarts of Labour with the annual laying of wreaths for those passed on.

The political battle line was already drawn before the Labour Day weekend and political camps were mobilised weeks in advance.  People’s Action Movement leader, Mr. Lindsay Gran,t dismissed a CADRES poll which concluded that Kittitians were satisfied with the current state of affairs as hype leading up to the annual Labour Day march.

PAM also issued a press release in which the Labour Day march is described as “dwindled turnout” and asserts that thousands visited PAM Headquarters throughout the day for their activities.

In a post-mortem assessment of the Labour Day weekend and march, Dr. Harris concluded that the Labour Party and its supporters were “the stars of the moment.”  He said that the Labour Queen Show had a record number of young people attending and that it indicated an energised base in the party.  He also said that the last public meeting before the march had “an election announcement crowd.”

“One was not surprised that on Monday we had a large expanse of road covered with people actively participating but not only those directly in the march were those on the side lines who had come specifically to give positive support,” Dr. Harris said.

“There were the detractors as there was at five-ways a small group of PAM people and as we turned around at the fire station, but generally the large throng of persons were people who had come actively to say we are here in solidarity with you, never mind we are not in there as part of the march but we have come and we are satisfied and we are looking on and we are still concerned about you and your development.

“The people who are better at statistics than I am could give their own numerical assessment, but what I could give is a qualitative response to it and to say it was an outstanding march, it was much better than last year,” added Harris.

The PAM leadership has charged that the current Labour Government owes ex-sugar workers $16 million.  Harris dismisses this as “political antics in a silly season.”

Harris explained that the $16 million is the difference between the $40 million the government had first estimated as compensation payout and the $24 million that was actually paid out.  Harris believes that the Labour Government gave the ex-sugar workers the best deal possible and points out two calculations were used and the better of the two was what the worker received.

He said that the discrepancy between the two figures is not an accountability issue and if the PAM leaders were successful in forming the next government and making good on his promise of paying the additional $16 million, he would have to do so from tax payers’ money.

Despite the symbiotic relationship between party and union and now government and union, Harris believes there is still a role for the union to play in advocating workers rights.  He pointed out that many misconstrue the Labour Department as a worker advocacy agency when it is in fact an arbiter for worker and employer.  He noted that the Labour Department ensures that the labour laws are adhered to and that a union advocates for workers rights and conditions.

At the culminating rally after the march, Prime Minister Hon. Denzil Douglas announced initiatives in keeping with the tradition of the labour movement.  The Prime Minister has promised to review the minimum wage and to look into the feasibility of paying a gratuity for workers at the industrial site.  This would be a major achievement for workers, comparable to non-established government workers achieving tenure and permanency in their posts under this administration.

The Prime Minister also promised more relief for working class people who are hit hard by the current global rise in food prices.  Harris said the government attempts to improve the lot of ordinary folks is a challenging one and the tax relief to offset rising prices will result in the government losing over $3 million in revenue for the year and the government still has to ensure that social services such as healthcare and education remains at a high standard for all.