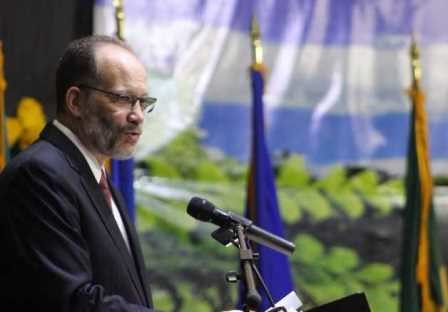 Photo: CARICOM Secretary-General Ambassador Irwin LaRocque speaking at the Opening Ceremony of the Thirty Eighth Regular Meeting of the CARICOM Conference of Heads of Government on Tuesday evening in Grenada.

Grenada– Ambassador Irwin LaRocque, secretary-general of the Caribbean Community, is of the view that the CARICOM Single Market and Economy (CSME) is still the most viable way for sustainable development in the region. He made this disclosure at the opening ceremony of the 38th regular meeting of the CARICOM Conference of Heads of Government on Tuesday evening in Grenada. He said the task now was to ensure the private sector fully utilises its provisions.

"We must move to strengthen the enabling environment to support their efforts,” he said. “Trade facilitation and the ease of doing business at the regional level are at least equally important as fiscal incentives. We must come to a conclusion on issues such as government procurement, harmonisation of customs rules and regulations and transparent harmonised sanitary and phytosanitary measures.”

Citing results from an Inter-American Development Bank study, the CARICOM secretary-general explained that if the region addressed challenges associated with regional transportation, inter-regional trade could be doubled. This, he said would have a positive effect on competitiveness and external trade as well as member states’ ability to attract investment.

He also said that a new CARICOM Multilateral Air Services agreement – which will be an item on the agenda – could result in reduced freight rates and passenger airfares and increase air transport services, leading to more options for consumers and expanded inter-regional tourism.

Another topic on the agenda for the heads of government will be the Human Resource Development 2030 Strategy. LaRocque said the Commission on Human Resource Development would present the strategy, which will address the development of skills for the 21st century economy and society. He said that the important factor in education and training was providing employable skills, opening the mind to identify opportunities and encouraging the process of lifelong learning. According to him, the plan was to have a globally competitive innovative and seamlessly integrated education system for the Region by 2030.

LaRocque also advised that an agreement for the establishment of a Caribbean Community Centre for Renewable Energy and Energy Efficiency, which will be headquartered in Barbados, will be open for signature at the meeting.

Turning to the matter of non-communicable diseases (NCDs), the secretary-general lamented the fact that the lifestyle and choices being made by the citizens of the region were causing incidents of NCDs to reach almost epidemic proportions. He noted that while NCDs affected people individually, there were repercussions that had adverse social and economic effects regionally. As the region commemorated the 10th anniversary of the Port-of-Spain Declaration on NCDs, he urged the heads of government to reassert their leadership and encourage regional citizens to accept responsibility for their lifestyles and what they consumed, especially since there remained areas of significant concern with regard to risk factors for NCDs, particularly childhood obesity.

LaRocque also used his remarks to congratulate Shirley Pryce, who was honoured with the Triennial Award for Women. He said the award recognised an outstanding CARICOM woman who had made a significant contribution to the economic development of the Caribbean. “Ms. Pryce has earned this award through championing the rights of domestic workers in the region and around the globe,” he said. “She is a true ambassador and a global leader who is making a difference in the lives of so many women and marginalised workers! Congratulations, Miss Pryce."

Speaking to the matter of regional security, the secretary-general said significant progress had been made on regional security instruments since the last meeting of the conference. This, he said, would add to the arsenal in the battle to secure the region. He also expressed hope that a CARICOM Arrest Warrant Treaty, which was approved by the Legal Affairs Committee (LAC), would be opened for signature at the meeting.

In closing, the secretary-general did not miss the opportunity to invite everyone to Barbados for CARIFESTA XIII from Aug. 17 to witness what he called “the creative talents of our people and the bedrock of the region’s creative industries. Come and have some fun,” he said. “Come and celebrate the Caribbean civilization.”

The summit will conclude July 6.