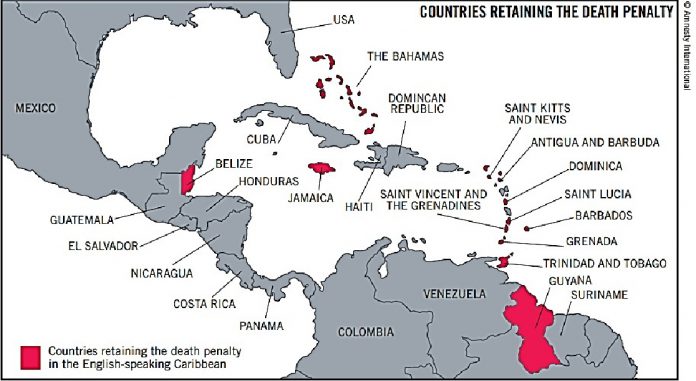 BASSETERRE, St. Kitts –- Ten years ago, on December 19, 2008, St. Kitts and Nevis authorities carried out what was to become the last execution in the Americas, outside the U.S.

Amnesty International released a statement to observe a key judicial decision 25 years ago that but a brake on the implementation of death sentences in the region. Chiara Sangiorgio, with Amnesty’s International Secretariat and Adviser-Death Penalty, said this anniversary offers an opportunity to reflect on the present state of the death penalty in the English-speaking Caribbean.

Trends on the use of this punishment point to the inevitability of its abolition. On the occasion of this anniversary, Amnesty International has renewed its call on governments in the English-speaking Caribbean to take prompt steps towards consigning the death penalty to history once and for all.

A quarter of a century ago, on November 3, 1993, the Judicial Committee of the Privy Council (JCPC) in London, Jamaica’s highest court of appeal, ruled in its critical judgment Pratt and Morgan v. The Attorney General for Jamaica and another (UKPC 1, 2 November 1993) that “in any case in which execution is to take place more than five years after sentence there will be strong grounds for believing that the delay is such as to constitute ‘inhuman or degrading punishment or other treatment.’” At that time, at least 301 people were known to be under sentence of death in the English-speaking Caribbean.

This judgment, which was applicable to all jurisdictions that retained the JCPC as their final appellate court, had important ramifications for the use of the death penalty in the region and beyond.

First, the JCPC made a critical link between the use of the death penalty and the international prohibition on cruel, inhuman and degrading treatment, by highlighting a notion – the “death row phenomenon” – that was just emerging in the jurisprudence of individual national courts at the time.

The JCPC recognized the mental anguish death row prisoners are subject to while facing the prospect of execution and, while re-emphasizing the critical need to ensure all appeals and due process are followed, set a time limit after which death sentences are no longer enforceable.

This principle and legal precedent have since been echoed in pronouncements of national and international courts as well as decision-makers around the world.

As a result of this judgment, the death sentences of hundreds of prisoners have since been commuted. Amnesty International welcomed then the resentencing of over 100 eople in Jamaica, and the taking of similar steps in Trinidad and Tobago that commuted relevant sentences by early December that year.

The organization further noted that Grenada had taken a “most encouraging approach” by commuting the sentences of two people on death row even though they had only been sentenced a year earlier. As a result of this and other standards set by the JCPC and regional bodies, the number of death sentences imposed and upheld in the region has dropped, leaving roughly only 80 people known to be on death row at the end of 2017. This is 73percent fewer than in 1993.

Figures on the use of the death penalty in the English-speaking Caribbean indicate that there has been a significant reduction in the application of this punishment in recent years. Only half of the 12 English-speaking Caribbean countries have imposed new death sentences since the last man was executed in Saint Kitts and Nevis at the end of 2008. Five countries – Antigua and Barbuda, Bahamas, Belize, Jamaica and Saint Lucia – commuted their remaining death sentences in the past in five years (2013-2017), reporting empty death rows and leaving a minority of countries to carry the weight of the death penalty in the Americas region, together with the USA. This country has remained the only state to carry out executions, but even in the USA figures on death sentences imposed and implemented have reached historical low records.

As of the end of 2017, over 96 percent of all those on death row in the English-speaking Caribbean were held in three countries alone, Barbados (13 percent), Guyana (32 percent) and Trinidad and Tobago (52 percent) –- countries that retain the mandatory death penalty in their legislation. International law prohibits the mandatory imposition of the death penalty, as it removes from judges the possibility of considering any mitigating factors at sentencing in relation to the circumstances of the offence and of the offender.

The overall decrease in the death sentences in the region fully reflects global trends on the death penalty. In the past decade 13 countries have repealed the death penalty completely from their national legislation and a further two have become abolitionist for ordinary crimes, such as murder, retaining it only for crimes committed in exceptional circumstances, for example at time of war. Additionally, six US states – Connecticut, Delaware, Illinois, Maryland, New Mexico and Washington – have all abolished the death penalty since 2008. During the same period, 16 more countries undertook an irreversible commitment under international law to abolish the death penalty.

Executions in 2017 were reported in 23 countries worldwide, 12 percent of the total number of countries. Of these executing countries, only 11, or 6 percent, were “persistent” executioners, meaning that they carried out executions every year in the previous five years.

A recent decision by the Caribbean Court of Justice (CCJ), the highest appellate court for Barbados, shows that the momentum towards abolition is set to continue. On June 27, 2018 the CCJ ruled in relation to two cases from Barbados (Jabari Sensimania Nervais v The Queen and Dwayne Omar Severin v The Queen) that Section 2 of the Offences Against the Person Act was unconstitutional because it gave judges no choice but to apply the death sentence.

The court recommended resentencing for all cases where a death penalty sentence was initially given for murder under Section 2 of the Act. As the Parliament of Barbados continues its deliberations on draft legislation proposed in 2014, aiming at introducing judicial discretion in murder cases to comply with decisions by the Inter-American Court of Human Rights, the death penalty in the region was handed another blow.

Cracks in the wall of capital punishment in the English-speaking Caribbean were also seen at international level in 2018. For the first time, two countries from the English-speaking Caribbean did not oppose a UN call for the establishment of a moratorium on executions with a view to abolishing the death penalty, in a historic move that further shows that global consensus is building towards ending the use of the death penalty. On Dec. 17, in fact, the UN General Assembly adopted with record-high support its seventh resolution on the issue. For the first time, Dominica co-sponsored and voted in favour of the resolution, and Antigua and Barbuda and Guyana abstained at the vote, in an unprecedented move that shows the perception of the death penalty in the region is changing.

As the English-speaking Caribbean marks its first decade as an execution-free region, Amnesty International congratulates those governments who have recognized the ultimate cruelty of the death penalty and renews its calls on them and all other states that still retain this punishment to take further steps to abolish it for good.