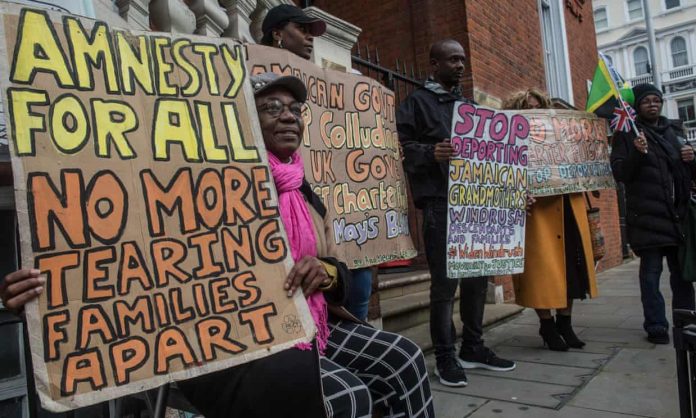 Guardian, BBC- Two emergency judicial reviews have been lodged in the high court by lawyers trying to halt a charter flight scheduled to leave the UK on Tuesday with about 50 Jamaican-born people on board.

The emergency legal actions, lodged by Duncan Lewis solicitors, argue that if the charter flight commissioned by the Home Office to deport dozens of Jamaican-born men goes ahead, the Home Office will be acting unlawfully.

The first legal action is on behalf of 15 men due to be forcibly removed on the flight and raises a series of concerns about the Home Office’s actions to try to force this group out of the UK.

The second has been lodged on behalf of the charity Detention Action. It follows the launch of the charity’s legal action against the Home Office last week, arguing that because the phone network for 02 has been down in the area immediately next to Colnbrook and Harmondsworth immigration removal centres near Heathrow, detainees have been denied the right to have five working days to contact and instruct lawyers after they received notice from the Home Office that they would be removed on Tuesday’s flight. 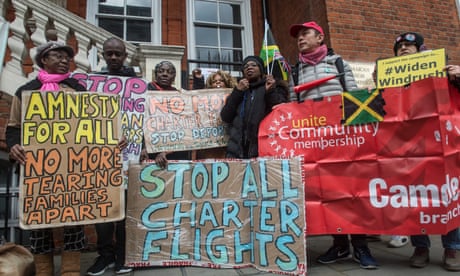 Jamaica deportations ‘must be halted until Windrush report published’

They are seeking a high court injunction to prevent the removals, scheduled for 6.30am on Tuesday morning, from going ahead.

Some detainees have told the Guardian that alongside these two judicial reviews they are also planning to seek a high court injunction to prevent the charter flight from taking off on Tuesday. They say that 20 detainees, ranging in age from 21 to 52 have formed a collective to bring this emergency court action.

More than 150 cross-party MPs have called on Boris Johnson to halt the flight citing a range of concerns.

Toufique Hossain, director of Public Law at Duncan Lewis solicitors, said many of the people on the flight had lived in the UK for most of their lives and that there needed to be a proper overview and consideration given to how the Home Office approached such individuals.

Bella Sankey, director of Detention Action, said: “Our information indicates that most have been convicted of drugs-related offences – often only once – and several have been groomed into county lines operations.”

The Home Office has not responded to recommendations from the former prisons ombudsman Stephen Shaw or to a leak from the Windrush Lessons Learned review, which suggested that foreign national offenders who have lived in the UK for most of their lives should not face automatic deportation.

Last year the Guardian revealed that at least five men had been murdered after their deportation to Jamaica. One of the five was Dewayne Robinson, 37.

It has emerged that Robinson was the cousin of Akeem Finlay, 30, one of those who is facing enforced return to Jamaica on Tuesday after a GBH conviction. Finlay came to the UK at the age of 10 and now lives with his partner.

Months before Robinson’s murder on 4 March 2018 after his deportation from the UK, another of Finlay’s cousins was murdered. “The men involved in the murders of my cousins have warned our family not to return to Jamaica or we will be murdered too,” said Finlay.