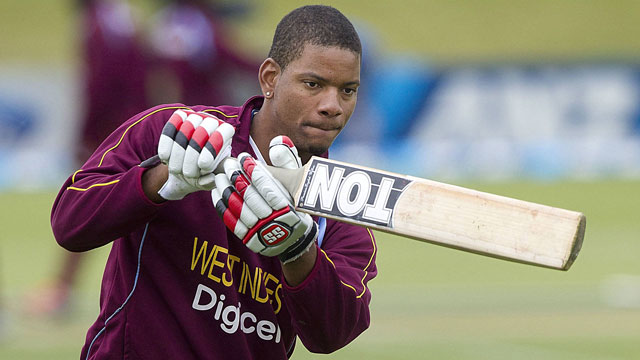 Basseterre, St. Kitts-The Leeward Island Hurricanes are aiming to make major improvements this year under the leadership of Captain Kieran Powell and his deputy Rahkeem Cornwall in the West Indies Regional Four-day competition.

In an exclusive interview with The Observer, Mr. Springer said the experience in the team could make a big difference in performances this season.

“The Leeward Islands Hurricanes has built a team around captain Kieran Powell and vice-captain Rahkeem Cornwall,” he said.  “When you look at the entire lineup, you will see Jahmar Hamilton, Nkrumar Bonner,  Monticin Hodge and Chesney Hughes. And when you look at their experience, you can see Leewards making a difference and competing in 2016-2017.”

Springer added that they want to rise off the bottom of the table and make an impression.

“Unlike past seasons, we have been putting in a lot more work this time around,” he said. “Led by Coach Reginald Benjamin, we had a three week camp in Antigua and Barbuda where we played a number of games and 12 days of cricket.”

“Batsmen were really tested,” he added.  “Akeem Saunders who scored 157 in one of the practice games was able to force himself into the team for the first two games. Over the years, Leeward Islands preparation has been a burden but this year we went out the way to make sure we have the best possible team preparation going into the tournament.”

Springer also stated that some former Leeward Islands and West Indies players were invited to speak to the current crop of players while they were in camp.

“We did a lot of mental work,” he said. “We had former players like Curtly Ambrose and Dale Joseph come by to speak to the guys and we have leaders in the team outside of the captain.

As for Mr. Powell’s leadership, he said, “It is wonderful to have Kieran back in the fold and leading the team. You know the Leeward Islands is in a transition period and there is no better person to lead us.”

Springer was also confident that players from the Leeward Islands could once again have a prominent presence on the West Indies team following Cornwall’s exploits in Sri Lanka with the West Indies ‘A’ team where the all-rounder picked up 23 wickets.

“It is up for these guys to be consistent and they have to want it,” he declared. “We brought back Hugh Gore as manager to take the team to another level. Once they do well, the sky is the limit. Cornwall is not far off from playing test cricket and if we get good performances from Kieran Powell and Jahmar Hamilton, the next thing you know Leeward Islands could have four to five players in the West Indies set up.”

Springer cautioned that a long season is ahead and said the franchise is breaking it down into stages.

“It’s a long season and the first objective is the five games in the first round. Then we get ready for the Super50 and then come back for the final phase of the tournament. We are taking it in stages one game at a time,” he said.

The Leeward Islands drew their first game versus Barbados last week after winning first innings points and is set to face the defending champions Guyana Jaguars in a day/night encounter this weekend at Warner Park.