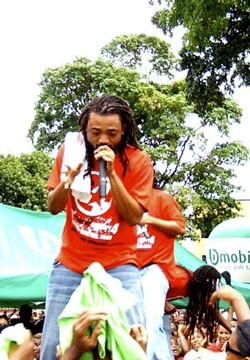 An initiative of the Ministry of Tourism, the network will air Machel Montano HD & Friends special concert, including a signing for fans at J & R Music and Computer World as the star celebrates his 25th year in the music industry.

The 30-minute show also features award-winning Trinidadian masman Peter Minshall and has been appropriately billed the “3’Ms-Machel, Minshall and Madison Square Garden” as it showcases the tourism product of T&T against the background of its soca music, mas and other aspects of its diverse culture.

Tourism Minister Howard Chin Lee said, “We want our music, culture and the beauty of Trinidad and Tobago to be known internationally, and we have found that BET J is a great network to target both our overseas-based nationals, and potential and repeat visitors.”

He said Soca is on the cusp of becoming an international genre and the world must be aware of its roots.

Cybelle Brown, vice president of sales and business development with BET Digital Networks said the show will be aggressively promoted before its airing both on the air and on the networks’ Web sites. “We are delighted to continue our partnership with both the Ministry of Tourism and the Tourism Development Company of T&T in 2007, and in the process, promote a “true Caribbean” experience to our discerning viewers,” she said.

The show will air four times on BET J’s popular Island Lime slot on Saturdays and twice on BET. The broadcast dates will be announced shortly.

BET J is a subsidiary of Viacom, Inc and provides music and original programming featuring a unique mix of Black music, culture and style including R&B, soul, jazz and world music along with movies, riveting talk, concerts and in-depth interview shows. BET J is currently viewed in over 26 million households and growing.