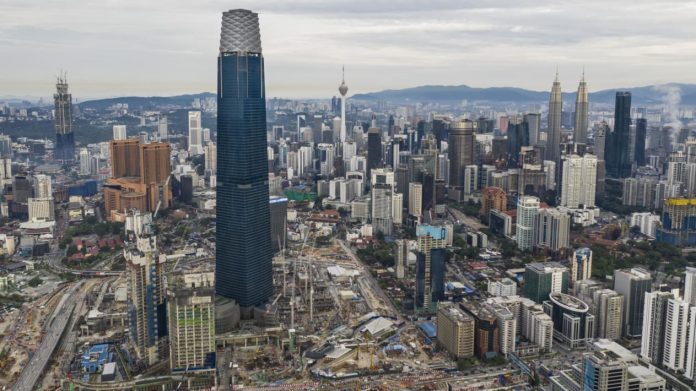 CNN– Southeast Asia’s tallest skyscraper is set to open its doors more than four years after allegations emerged against the scandal-ridden state fund that first backed its construction.

Located in Malaysia’s capital, Kuala Lumpur, Exchange 106 will welcome its first tenants in December. It is the showpiece skyscraper in a development embroiled in the 1MDB financial controversy that shook the country and landed its former prime minister with criminal charges including money laundering and abuse of power.

Opened to journalists for the first time Wednesday, the building contains 93 floors of office space, as well as restaurants and shops in its lower reaches. Its distinct geometric glass crown can be illuminated in various colors, while a “sky lobby” offers views over the Malaysian capital.

Exchange 106 is more than 40 meters (131 feet) taller than the nearby Petronas Towers, the world’s tallest buildings between 1998 and 2004. The new tower has also overtaken Ho Chi Minh City’s Landmark 81 to become Southeast Asia’s tallest skyscraper.

An official press release for the building describes it as a “unique retelling of the city’s early township and structures … in an area once known as ‘Pak Luk Kan,’ which literally translates into ‘Land of the 106 Bungalows.'”

The 106-story skyscraper is located in new 70-acre development known as Tun Razak Exchange (TRX). Named after disgraced former prime minister Najib Razak’s father, the business district was bankrolled by the controversial 1Malaysia Development Berhad (1MDB) fund upon being announced by Najib in 2012.

The project was in danger of being stopped after investigations into 1MDB’s role in an alleged scheme to launder billions of dollars got underway in 2015. But construction work continued, and Exchange 106 broke ground the next year. In 2018, Malaysia’s Ministry of Finance announced that it would help fund the remaining construction of TRX alongside Indonesian property developer Mulia Group.

At a press conference last year, finance minister Lum Guan Eng said that almost 3.7 billion Malaysian ringgit ($884 million) of funding for the TRX development had been “misappropriated” by 1MDB to pay off debts. He expressed hope that his government will recoup some of those losses by investing up to 2.8 billion ringgit ($669 million) to help complete the project.

Related video: Vessel-shaped ‘supertall’ skyscraper transforms Beijing’s skyline
Earlier this year, Lum told reporters that he would not allow the new district to become “collateral damage to the past excesses of the previous government.”

“Rest assured, the TRX is detoxified and has now been cleaned up and is moving forward as a world-class international, global project,” he added, saying that his government was “slowly but surely exorcising the ghosts of 1MDB.”

Najib, who founded the 1MDB sovereign wealth fund just weeks into his premiership in 2009, denies the charges against him.