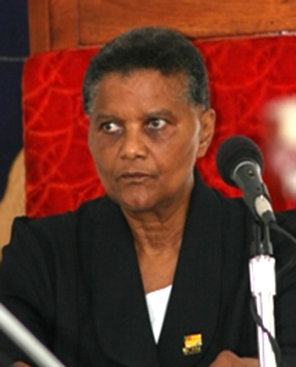 “I will put country above self… I will serve my country; I am glad to do it” were the words of new Acting Deputy Governor-General of Nevis Marjorie Morton Aug. 31 during an interview with the Observer.

Morton will officially be sworn in today at 11 a.m. at the Charlestown High Court. Governor-General Samuel Weymouth Tapley Seaton will preside over the ceremony and His lordship Trevor Ward QC will administer the oath of allegiance and the oath of office to Morton.

Morton told the Observer said that she will be “glad” to serve her country.

“If I am called to serve, I will put country above self,” she said. “I was asked; it was not on my mind at all – I was asked. I thought about it and considered it. I decided if that is the way I can serve my country, I am glad to do it.”

Morton will act in the office of the deputy governor-general in Nevis from Sept. 1 to Dec. 31, a period of just three months. She said the short stint was her decision.

Marjorie Morton was appointed assistant secretary in the Ministry of Nevis Affairs in 1980. Two years post independence, she was appointed permanent secretary establishments in preparation for the transfer of power to the Nevis Island Administration. Additionally, she served as clerk of the Nevis Island Assembly. She retired in 1994 after a combined 28 years of service in education and civil service.

In 1996, she was elected president of the Nevis Island Assembly. She served under two different governments before retiring in 2011.

In a news release, it was stated that “Mrs. Morton’s activities were not confined to her professional and career goals. She was strategically involved in a number of civic relatable activities and in church work. For a number of years, she participated in programmes offered by the Ministry of Social Development for selected students at the Charlestown Primary School in homework help and mentoring. When the RBTT Bank introduced the Young Leaders Project in St. Kitts and Nevis, she was asked to be a judge for the project. She volunteered in that capacity for a period of 10 years. She has been a lay reader at the St. Paul’s Anglican Church from 1996 to present. She studied and obtained the diploma in theology in 2006. She serves as a member on the pastoral and family life committees.”

In the 2015 National Honours Awards, Morton was recognized with the Award of Companion of the Star of Merit for her public service.