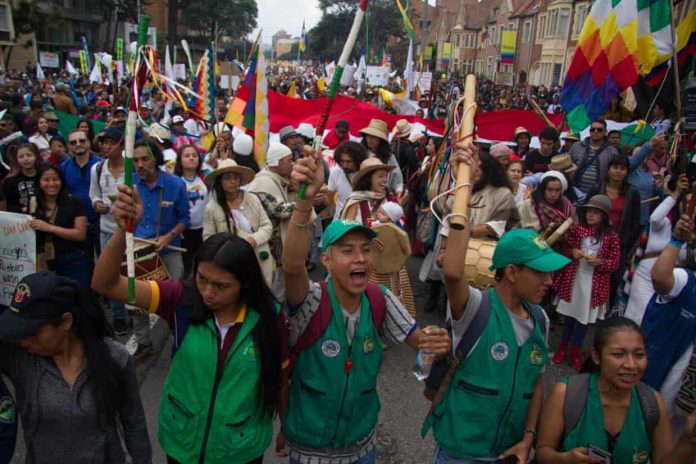 Three people were killed in Colombia  amid nationwide mass protests against the right-wing government of President Iván Duque, officials say.

More than 200,000 people took to the streets to show discontent over possible austerity measures.

The protests were mostly peaceful but clashes between demonstrators and police broke out in cities including the capital, Bogotá, and Cali.

There has been a surge in anti-government protests in Latin America.

Pensioners, students, teachers and union members joined marches across the country in one of biggest mass demonstrations in recent years. 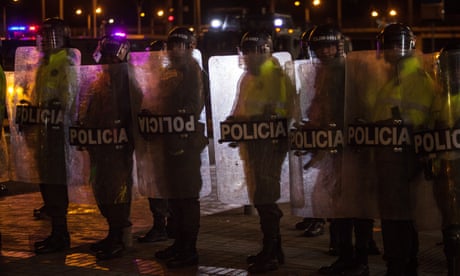 Colombia to close its borders in attempt to contain mass protests

The marches began in Bogotá largely without incident, although a few clashes broke out near Bogotá airport between protesters and riot police around midday. As the rain cleared, more confrontations broke out across the city in the early evening. Explosions could be heard across the city. Teargas was fired in the Plaza de Simón Bolívar and at the campus of the National University, where protesters battled with security forces.

The national strike was prompted by proposed cuts to pensions weeks ago. Though the reform was never formally announced, it became a lightning rod for widespread dissatisfaction with the government of President Iván Duque, whose approval rating has dropped to just 26% since he took office in August last year.

Protesters also expressed anger at the perceived slow-walking of the rollout of the country’s historic 2016 peace deal with the leftist Revolutionary Armed Forces of Colombia (or Farc) rebel group. That accord formally ended five decades of civil war that killed 260,000 and forced more than 7 million to flee their homes.

Others say Duque has done little to protect social leaders and indigenous people, who are being murdered at alarming rates. Public fury has also been stoked by a recent airstrike against a camp of dissident rebel drug traffickers, which left eight minors dead.

“We live in a country that kills children, that kills social leaders, with a government that is against peace,” said Alexandra Guzmán, a businesswoman who hires ex-Farc members to work at her furniture workshop. “That is why we have to change something. We cannot continue to live like this.”

And as in Chile, which has been mired in more than a month of unrest, many in the expanding middle classes feel left behind as the economy continues to grow.

“It is not the economy that is growing like Duque and his friends say. It is the profits of the bankers that are growing, which means that they are draining the economy,” tweeted Gustavo Petro, an opposition senator who ran against Duque for the presidency last year, ahead of the march.

“I’m marching today because my generation need a pension when we grow old,” said María Rodríguez, a student who was marching with her colleagues. “We have to stand up for our rights.”

The marches were mostly peaceful, although clashes broke out near Bogotá airport between protesters and riot police.

In the past, such protests have failed to attract large turnouts, which activists attribute to a fear of being demonized as hardline leftists or rebel sympathizers.

An explosion of protest, a howl of rage – but not a Latin American spring

“We have fought for generations to make sure we are no longer persecuted to speak,” said Mafe Carrascal, a prominent activist who attended the marches in Bogotá. “The peace process gave us a big tailwind in showing that to support peace is not to be a defender of the guerrillas.”

Also in attendance was Jacqueline Castillo, a mother whose brother was murdered by the army before being falsely declared an enemy Farc combatant – one of thousands of so-called “false positive” killings that plagued the country from 2002 to 2008. Some reports say the practice may have returned.

“We aren’t scared to fight for justice and peace, and we’ll take to the streets until we get it,” Castillo said. “The people do not surrender, dammit!.”