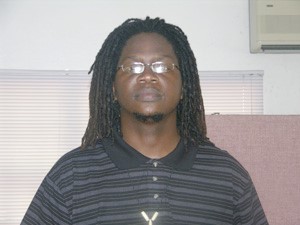 One of the most phenomenal reggae artists in St. Kitts and Nevis, Masud Sadiki gave Antiguans a taste of what Kittitian reggae is all about when he performed at a show down there last Saturday evening.

The concert was organised by Soundproof Promotions in collaboration with 5-star General. The show was considered a success and had a massive crowd. Masud said he was spending time in Antigua with a local artist, General P during the weekend.

“I went to Antigua on Friday to support General who was launching his new album. His manager called me and asked me to come and support General and to do two songs at the show. I made a guest appearance,” Masud said.

“I went in support of the launch but that did not come off because the CDs didn’t come on the same day, so they postponed it until another day. A few days before I left St. Kitts, General P told me that he was gonna be on island and there was going to be a show.”

Masud performed his hit tunes Love for Mama and Count your Blessings. He said Antigua is a place that really supports music and it was an honour to be sharing the stage with Lucky Dube.

“It was a good surprise for me. I got a chance to meet Kenyatta Hill, who has continued his father’s music since he passed away. The show was excellent,” Masud said.

“I had one quick rehearsal with them and they did a really good job. The crowd appreciated what I was doing. They know the songs and a lot of them really didn’t know it was me who sang those songs, even the band members.”

It has been a while since he performed in Antigua.

The crowd showed him a lot of love despite the rain that fell while he was performing.

“Just being in Antigua and enjoying the feeling of a different place was what I enjoyed most.”

Masud said he had not been overseas to perform for a while because he is currently working on his new album Down to Earth which should be out in two months.

“We want to have a launch where people could come and hear the music first. We are going to have special offers and people can also come to get their CDs and T-shirts.”

Masud is always ready to perform in St. Kitts and considers it an honour because here is where he discovered himself.

“I’m ready to perform any time because my band, Calabash is here. I always extend a big thank you to the people of St. Kitts and Nevis because they support me. The fans are the boss really. You know you tend to hear that St. Kitts and Nevis people don’t support their own, but I find that statement untrue. I think Kittitians and Nevisians just want you to be good and then they would be behind you. I also want to thank the musicians in my band and anybody else who had to do with my existence as an artist.”

Masud made his first public appearance in 1991 at the Basseterre High School. Over the years, he has performed at almost every show in St. Kitts and during carnival. Masud was well known when he first came out because he favored Shabba Ranks’ music.

After some time, he started to do his own songs. His first hit tune was Donovan Make Them Jump Up performed with KD-Biz. He also worked with Small Axe Band and Razer Band. His first album came out in 2001. His second, Sun Down to Sun Up, came out in 2003.