MEXICO CITY, Nov 27 (Reuters) – Tens of thousands marched with Mexican President Andres Manuel Lopez Obrador on Sunday in a massive demonstration through the center of the country’s capital to show their support for the head of state before a 2024 general election.

“Mexico is no longer run by oligarchy, now there is a democratic system whose priority is the poor,” the president told people crowding the vast Zocalo square at the city’s center.

Lopez Obrador, whose administration has made double-digit minimum wages hikes for the past four years, proposed that the 2023 increase could land around 20%, and forecast the country’s economic growth would beat expectations.

Supporters, many of whom traveled to the capital by bus, shook hands and took selfies with the 69-year-old head of state as he crossed the square, many waving flags for the ruling National Regeneration Movement (MORENA) party.

“The president is from a humble background. He’s done a lot of social programs,” said Teresa Magana, who pooled money with a group of 40 to travel 12 hours from Tabasco, the president’s home state. “We want him to continue.”

The speech followed a five-hour march through the capital’s Reforma Avenue and performances by mariachi musicians in the main square. The president’s approval ratings are around 60%. 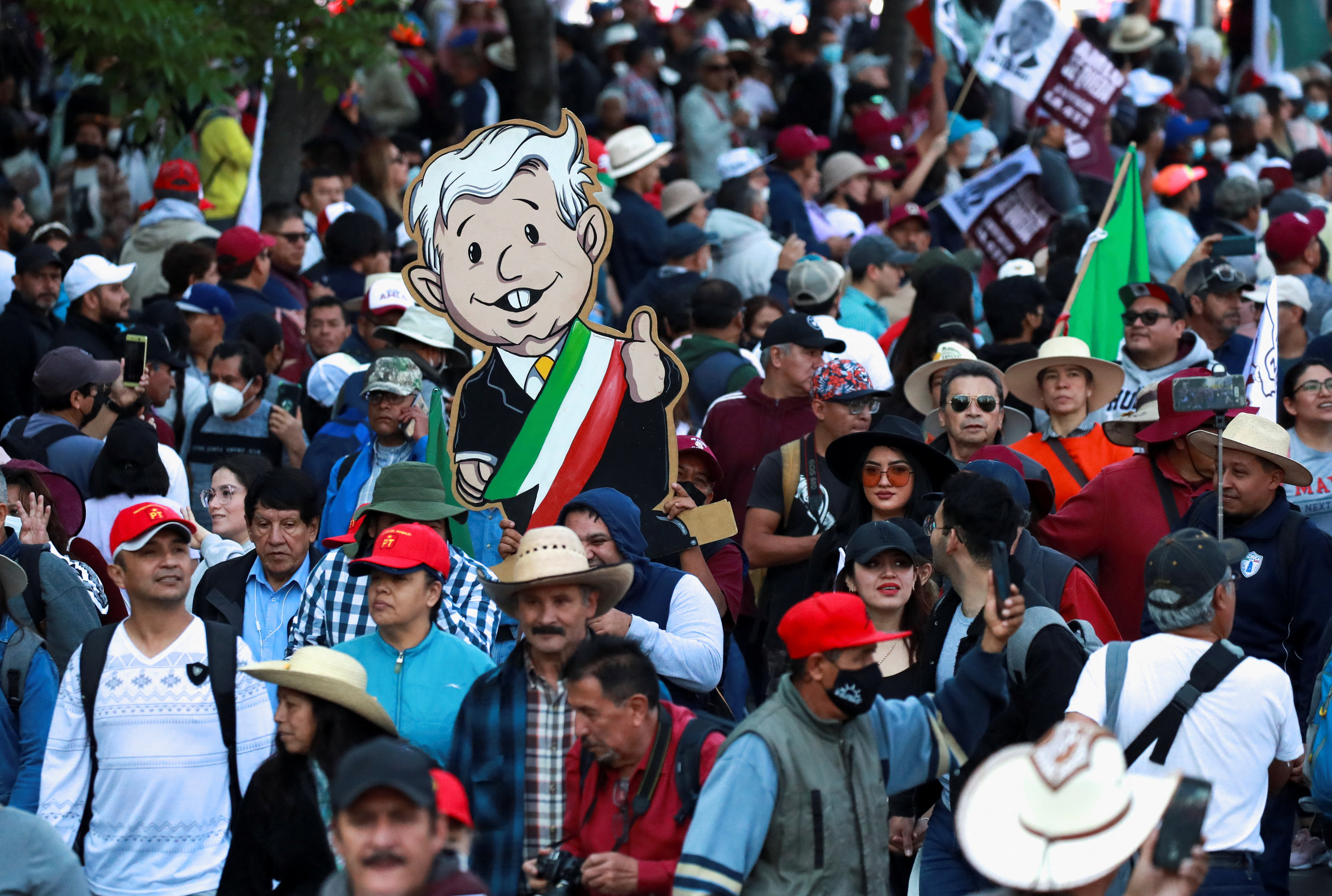 People take part in a march in support of Mexican President Andres Manuel Lopez Obrador’s government policies and to celebrate his four years in the office, in Mexico City, Mexico November 27, 2022. REUTERS/Henry Romero

Mexican presidents are limited to a single six-year term. Foreign Minister Marcelo Ebrard and Mexico City Mayor Claudia Sheinbaum, who were at the march, are likely party candidates to run for the next election, scheduled for the summer of 2024.

The march comes a fortnight after critics of the president’s plan to reform the country’s electoral system came to the streets in tens of thousands, the largest demonstration against his policies so far.

Earlier this month, Congress started discussing the plan. Lopez Obrador, known by his initials as AMLO, says his proposal would improve democracy, limit economic influence in politics and cut advertising time, but his opponents fear the change could presage a power grab.

The plan would reduce the budget of the country’s INE electoral commission and change the way councillors are elected.

Some people protested on Sunday with coffin-shaped signs marked INE.