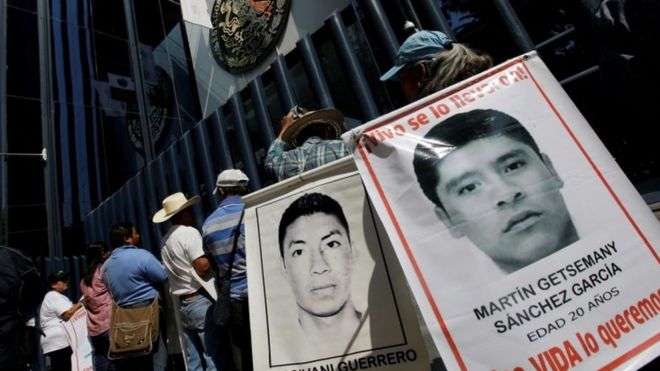 Prosecutors have announced the arrest of a suspect in the case of 43 trainee teachers who disappeared in the Mexican state of Guerrero in September 2014.

Prosecutors accuse the suspect, Ángel Casarrubias, of being a member of the Guerreros Unidos gang.

A government report said the students were killed by the gang which mistook them for members of a rival group.

But subsequent independent investigations have cast doubts on the official report’s findings.

What is the case about?

The case dates back to 26 September 2014 when 43 students from a teacher training college in the town of Ayotzinapa in Guerrero state disappeared after attending a protest in the nearby town of Iguala.

The officers maintained they had done so because the buses had been hijacked, while the surviving students said the drivers had agreed to give them a lift.

Forty-three of the students vanished after the clash.

What did the original investigation uncover?

An official government report published during the presidency of Enrique Peña Nieto said the students had been seized by the municipal police officers who handed them over to the Guerreros Unidos drugs gang.

The report concluded that the drugs gang had killed the 43, burned their bodies and dumped the ashes in a local stream.

Why were the findings questioned?

As early as 2015, independent investigators from the Inter-American Commission of Human Rights warned that the official investigation was “deeply flawed”.

They said that satellite images showed there had been no fire on the night of the students’ disappearance.

They also said that because the chain of evidence had been broken, it was not clear whether the charred remains of the only student to be positively identified were found at the rubbish dump or planted there.

Who is the new suspect?

Ángel Casarrubias is the brother of Sidronio Casarrubias, who police say is the leader of the Guerreros Unidos gang.

Sidronio Casarrubias was detained in October 2014. After being questioned by police, he signed a detailed confession saying not only that he lead the gang but also that Guerreros Unidos had killed the students and burned their bodies.

Two other brothers, Adán and Mario, were also arrested in the months after the students’ disappearance.

Adán Casarrubias was sentenced to 12 years in prison in 2018 for illegal arms possession while Mario was found guilty of links to organised crime and is serving a 10-year-sentence.

Ángel Casarrubias had eluded police until last week. He was finally captured on Wednesday in Mexico state but his detention was only made public on Monday.

What reaction has there been?

Felipe de la Cruz, a spokesman for the parents of the missing students, said he and the other parents would “wait and see” if Ángel Casarrubias could contribute fresh information about what happened to their children.

He added that what the parents would like to see is the arrest of Tomás Zerón, the former head of investigations for the Prosecutor-General’s office who led the probe into the students’ disappearance.

Mr. Zerón is one of six Mexican officials who are facing charges including torture, forced disappearance and judicial misconduct. Three of those charged have been arrested but Mr Zerón and two others remain at large.

The current Mexican president, Andrés Manuel López Obrador, is one of those who have been critical of how the official investigation was handled.

Last year, the president ordered a new investigation, which he said would “start from scratch”.