BBC- Mexican nurse Ligia Kantun says that in 40 years of work, she has never witnessed such a poisonous reaction to health workers. While in many countries doctors and nurses are being praised for their work on the coronavirus front line, in Mexico dozens have been attacked.

Ligia, 59, says that she has worked during the swine flu pandemic in 2009 and an outbreak of cholera in 2013, but some people are “behaving psychotically in response to this virus. It is terrible”.

She was attacked on 8 April after leaving work in her hometown of Merida, Yucatan. Someone drove past her and threw hot coffee down her back. “Infected!” they yelled through the car window before speeding away.

She says that luckily she was not badly injured but recognises it could have been worse.

As of 28 April, there have been at least 47 attacks against health workers, particularly nurses, in the country, the Mexican government says. And the authorities recognise the true figure may be higher – reports on social media of discrimination range from nurses stopped from getting on buses to doctors assaulted by relatives of Covid-19 patients.

“It made me sad… to see how people are attacking us,” says Ligia. “That hurt me more – the psychological damage.”

Some of the attacks appear to have been motivated by a misguided attempt to disinfect health workers.

Alondra Torres, an ear, nose and throat specialist, had diluted bleach thrown over her on 13 April while walking her dogs in the city of Guadalajara. She does not see Covid-19 patients in her clinic, but is convinced her uniform made her a target.

Alondra, who suffered conjunctivitis and contact dermatitis on her neck and shoulder as a result, says she was “disappointed” that some people seem to believe she needs to be bathed in bleach.

“My eye was burning a lot, I couldn’t see well.” 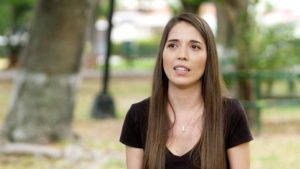 Doctors and nurses have not been the only frontline targets.

Daniel (not his real name) was getting off a bus a few blocks from the Guadalajara hospital where he works as a cleaner when he was brutally attacked by a group of other passengers.

“When I got on the bus I noticed that three people became aggressive. They kept repeating the word “dirty”, which they then repeated while they were beating me,” he says. “I felt it was never going to end.”

He suffered bruises to his head and face. Police suspect the assault was triggered by his hospital cleaner’s uniform.

Nurse Melody Rodríguez, 25, has even felt compelled to move house for the time being.

She was coming home to her village of Lo de Marcos, in Nayarit state, on 8 April, when she came face to face with a group of residents blocking her path.

“They said if I entered the village I wouldn’t be allowed to leave again. And they said that it would be better if I didn’t enter at all because I came from a source of infection,” she says.

A colleague filmed the incident and shared it on social media. The municipal authorities intervened to ensure Melody could get home, but she opted to just collect some belongings and rent a room in another town.

She was too frightened to go home.

“This is discrimination, and it is really detestable. We give our support to all workers in the health sector, everyone. They are our heroes, our heroines,” said Mexican President Andrés Manuel López Obrador a few weeks ago.

The government has subsequently deployed members of the National Guard in hospitals and some states have offered medical workers private transport and even hotel rooms so they can avoid long commutes home.

The World Health Organization says up to 38% of health workers experience physical violence at some point in their careers, but the coronavirus pandemic seems to have exacerbated this threat in Mexico.

Experts think the attacks reflect the public’s conflicted feelings about what the medical workers represent in a country which had recorded 40,186 cases and 4,220 deaths of Covid-19 as of 13 May.

“They (the health workers) symbolically represent the disease itself and the cure,” says María del Carmen Montenegro, from the Faculty of Psychology at the Universidad Nacional Autónoma de México

And she says that unlike other traumatic events, the virus is impossible to run away from, “and that generates more fear”.

Alondra, the doctor doused with bleach, agrees that the attacks are motivated by “a mixture of ignorance and fear”.

“What if [the attack involved] acid next time?” she says.

But she is determined to keep working, returning to her clinic just a few days after the attack.

“This is not going to make me doubt about my work, my profession or my dreams of continuing to help people”.

Ligia is also adamant she will continue to work.

“My country and my people need me and I will give everything I have.”

“We don’t need you to praise us, just let us do our job… That’s why we are there for you,” says Melody.