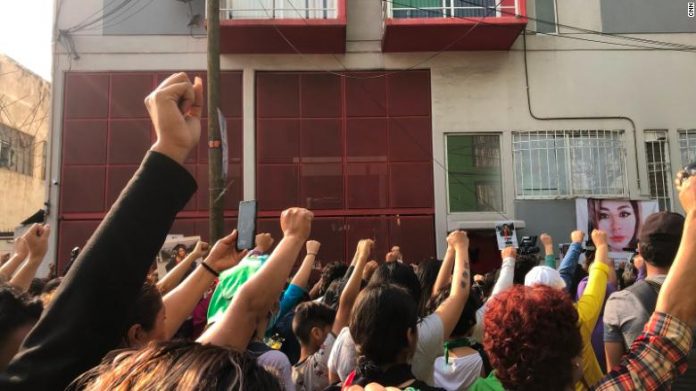 Hundreds of people gathered in Mexico City on Friday to protest against the murder of a young woman. Ingrid Escamilla, 25, was stabbed to death allegedly by a man she lived with, who then mutilated her body in an attempt to hide the evidence.

Forensic workers leaked images of her corpse, and a local newspaper has been criticised for published one of these pictures on its front page.

Femicide, the gender-based killing of women, is on the rise in Mexico.

More than 700 cases are currently being investigated, but activists say the number of women killed because of their gender is much higher.

The protesters, most of them women, moved through the Mexican capital holding placards calling for “responsible journalism,” and chanting slogans like “not one more murder”.

The group initially gathered outside of the city’s National Palace, where President Andrés Manuel López Obrador lives with his family.

“It seems to me the president has evaded the issue constantly,” one protester, Alejandro Castillo, told Reuters news agency.

“It is not a personal issue against him. We believe he has the possibility of raising several things on the agenda and has not done so.”

Demonstrators later marched through heavy rain to the offices of La Prensa, the newspaper that published grisly images of Ms Escamilla body with the headline ‘It was cupid’s fault”.

At least one vehicle belonging to the newspaper was set on fire, and several protesters clashed with security forces who tried to stop them from entering the newspaper’s offices.

La Prensa, in response to public criticism, has stood by its decision but said it was open to discussions about adjusting its editorial standards beyond legal requirements.

Earlier this month, many Mexicans flooded social media with photos of wildlife and natural landscapes, using the hashtag #IngridEscamilla to drown out the photos of her body circ

Her murder has shocked the country, but is only the latest in a string of slayings that have brought the issue of femicide into public debate.

Activists are critical of the fact that the vast majority of cases are never solved and only a tiny percentage of perpetrators are brought to justice.

President López Obrador – when asked about the classification of femicides – has previously accused media outlets of “manipulating” the issue.

But as protesters gathered outside the National Palace on Friday, he told reporters he was “not burying [his] head in the sand.

“The government I represent will always take care of ensuring the safety of women,” the president added.