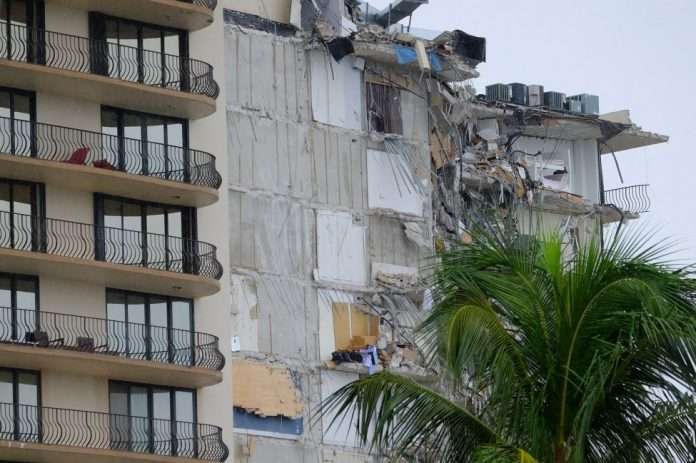 (UPI) — The death toll from the collapse of an oceanfront condominium tower near Miami Beach rose to four early Friday, with about 159 people unaccounted for as crews continued to search the debris for survivors.
Authorities overnight said at least four died in the sudden collapse of the 12-story Champlain Towers in Surfside, about 3 miles north of Miami Beach, on Thursday.
“We’re focused right now on search and rescue,” Miami-Dade County Mayor Daniella Levine Cava told Good Morning America Friday, noting that search crews had worked through the night.Part of the building fell early Thursday while many residents inside were asleep. Some 99 residents are believed missing.

“FEMA is authorized to identify, mobilize and provide at its discretion equipment and resources necessary to alleviate the impacts of the emergency,” the White House said in a statement.

Florida Gov. Ron DeSantis issued a state of emergency for Miami-Dade County on Thursday. Surfside Mayor Charles Burkett said, however, he hopes for more than just fiscal assistance and manpower.

“We are not lacking in resources,” Burkett told CNN. “We’re lacking for a little luck. What’s important right now is saving lives.”

Authorities were looking into the cause of the collapse, which sent half of the tower pancaking to the ground in just seconds. Cava said there are no signs of foul play. The building, which was built in 1981, was undergoing a major renovation at the time of the collapse.