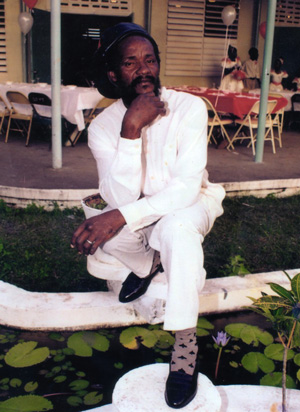 Newtown residents were startled out their sleep last Friday just after midnight when what sounded like gunshots rang out, causing the Federation’s murder count to rise to ten.

Police responded to a report at about 12:30 a.m. on George Street to find Dave ‘Jahman’ Browne sprawled on his back, lying dead in a pool of blood.

Someone who was at the scene before the police arrived said there was a container with food very close to the body and that the head area of the body was covered in blood. The person also claimed that three distinct gunshots had been heard before Browne was seen dead on the roadside.

A police release stated that Browne, 39, suffered a single gunshot wound to his head and was pronounced dead at the scene.

The Observer attempted to get confirmation on the circumstances surrounding the murder, only to be told that ‘the incident is being investigated’. Unsubstantiated rumours suggest that the shooting was an act of retaliation over a stabbing incident that had occurred just hours before that left Javid ‘Fat Head’ Johnson seriously injured.

Under guaranteed anonymity, one source told this paper that Fat Head and another man had been involved in an altercation sometime around 7 p.m. in J’s Shop and Save on George Street. The person said that it was unclear what had sparked the fight that sent shop patrons scrabbling and that sent Fat Head to the hospital with stab wounds.

Word on the street has given rise to speculation that the execution style murder was carried out in retribution, as a close relative of Browne had been the one who had stabbed Fat Head. The stabbing victim remains hospitalised.

An autopsy on Browne determined cause of death to be shock and haemorrhage due to the gunshot wound he sustained to his head, just behind his right ear.

Up to press time, police have not taken anyone into custody for the murder.