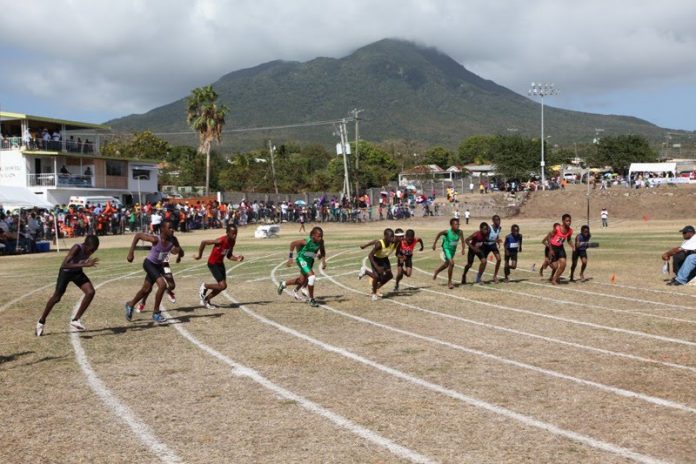 This year’s “Mini Olympics” will finally be held the new Long Point Mondo Track March 28 following a year-long delay for improvements deemed needed by the Minister of Education,

With the first phase of the EC$10 million MONDO track  completed, the Premier of Nevis and Minister of Education Hon Mark Brantley along with the Minister of Sports Hon Eric Evelyn are both in agreement that the Inter Primary School Athletic Meet will be held at the venue on March 28.

The Interprimary School Championship dubbed the Mini Olympics was slated to be held on the MONDO track last year however Minister in charge of Education, Hon. Vance Amory made the official announcement days before the meet that he was not satisfied that the track was in a state of readiness for the meet hence sending the venue back to the Elquemedo T. Willett Park.

The MONDO Track was built by LEFCO Construction Company and Surrey Paving and cost an estimated EC $10 million.

The Premier along with other members of the Nevis Island Administration Cabinet toured the field. The Premier said that they were looking at the state of readiness and making preparations   to map out the last bits and pieces that needs to go in place, the bathroom etc.

“We really expect this year at least 10,000 people in here for this meet. It’s going to be huge, for the inaugural event here at this venue…”, he said.

Brantley lauded project manager Timothy Caines who has  been managing the venue from the beginning until present.

Minister of Sports Evenly said that he became ecstatic when walking into the Mondo Track. “It is a fantastic facility,” he said.

“This venue is great for athletics in Nevis and the development  of the sporting in Nevis. I am happy and delighted that the Interprimary for 2018 will be hosted here,” he said.

In November 2017 the track received certification from the International Association of Athletics Federations making it a Class 2 Facility .A Class 2 Facility means that Nevis can host any international athletic event sanctioned by the IAAF,  the governing body for athletics worldwide. The facility can host anything except the Olympic games or a world championship.

Project Manager Caines said  the facility is currently in phase two, the stadium and the parking facility. They are opening with two sections of the stadium so it can be comfortable and safe for the Interprimary. The Grand Stand Stadium cannot be completed before Interprimary this year. “There is just not enough time,” he said.