CNS-Jamaica Tourism Minister Edmund Bartlett has said crime and security concerns were hurting the Caribbean’s potential to generate greater returns from its tourism product, as based on studies, the region could have earned US$13 billion more than the US$37 billion that was earned last year.

Bartlett, who was speaking on the first day of the four-day 33rd annual general conference of the Association of Caribbean Commissioners of Police (ACCP) at the Montego Bay Convention Centre in St James yesterday, said studies have shown that the region has the potential to earn much more than it is now earning.

“We brought in 30 million people [visitors], but we could have brought in 45 million. One of the reasons [we didn’t] was that there is a creeping volcano … the rumbling sounds of insecurity that are pervading our Caribbean space,” said Bartlett.

“Today, the biggest problem in the industry is safety and security. These rumblings are not only in Jamaica, as they are in places like Trinidad, St Kitts, Belize, Bahamas, and Barbados,” continued Bartlett. “This meeting is timed properly to listen to those rumblings and for us to have discourse to craft some responses in dealing with these seismic tremors.”

Bartlett, who was awarded the Caribbean Tourism Minister of the Year at the Caribbean Travel Awards 2017, said that tourism, as an industry, can only operate when security is in place.

“Tourism is a vulnerable economic activity. It is susceptible to major disruptions of all types, and it flourishes and operates only within a space of surety, and surety only comes about by security and seamlessness,” stated Bartlett.

The ACCP’s conference is being held under the theme ‘An integrated approach against serious and organised crime – implications for regional growth and development’.

Representatives from 25 member states are in attendance at the conference. Their mandate is to discuss regional collaboration in the development of policing strategies, identification of proactive crime-prevention measures, and improvement of police-community relations. 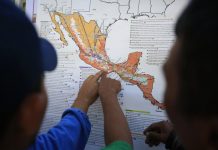