Photo: Minister Eugene Hamilton said that the Department of Environment remains committed to leading on environmental matters such as climate change, biodiversity and biosafety.

Basseterre, St. Kitts – As the debate continues on the Appropriation (2018) Bill,2017, the minister of environment, the Honourable Eugene Hamilton, used the occasion to highlight the important role that his department is playing in the Federation of St. Kitts and Nevis.

“The department … is…perhaps one of the most important departments in the government…because of the impacts of climate change,” said Minister Hamilton to the many challenges that exist such as hurricanes, soil erosions and land degradation to name a few. “This department has to focus and pay attention [to] what’s happening worldwide, including on our own shores because of climate change. So, the department of Environment has to be conscious of this and pay attention as to how we preserve our environment.

He said that the department “remains committed to leading on environmental matters such as climate change, biodiversity and biosafety,” adding that it is tasked with introducing projects to protect the environment. “One of the department’s mandates includes initiating and implementing environment policies, and projects and programmes in order to achieve sustainable development in St. Kitts and Nevis.” In 2017, the Department of Environment played the leading role on a vast number of projects and programmes “geared toward environmental management, preservation and conservation of our natural resources,” he added.

A major project of which the minister spoke is the “Conserving Biodiversity and Reducing Habitat Degradation in Protected Areas and their Areas of Influence,” launched in August 2015. Its aim is expanding and strengthening the terrestrial and marine protected area system and reducing habitat destruction in protected area ecological functioning.

“The ongoing Conserving Biodiversity Project has allowed for St. Kitts and Nevis to fulfill significant aspects of its obligations under the Convention on Biological Diversity,” Hamilton said. “Special areas of mention that have been successfully executed are the active management of protected areas and national park through the hiring of park rangers and conservation officers. This is one success story of the Department of Environment.”

As part of the project, the Department of Environment launched a campaign in October 2017 aimed at increasing dialogue among students, fishers, farmers, policy and decision makers and the general public on the importance of using resources wisely and conserving biodiversity by demonstrating how biodiversity is linked to life and livelihood. 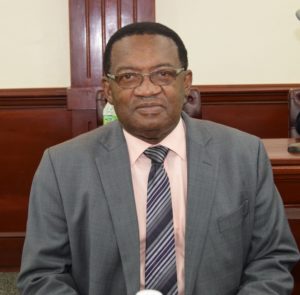