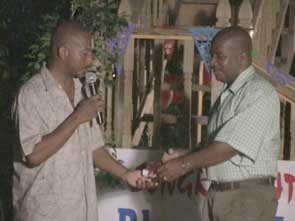 Making a monetary contribution of EC$2,500.00, which is equal to his monthly salary as a senator in the Federal Parliament, to be used in aid of the less fortunate students at his alma mater the Charlestown Secondary School, Minister Perkins observed that he was fulfilling a promise he had made at the celebration of his 5th year in formal politics this September.

He explained that once the island learnt of the tremendous success that the school had achieved in the overseas examination and in particular producing the state scholar, he sought permission from the Principal to hand over to the school the contribution which he had pledge earlier.

“In this envelope, is a cheque in the amount of $2500.00, which I proudly present to the headmaster of the school for use within the school,” said Perkins.  “I would ask that these funds be used to help the more unfortunate students in the school, those who at times find it difficult to meet certain needs and so that is my only request.”

In handing the cheque to Principal Edson Elliot, Minister Perkins told the gathering which was graced with the presence of Legal Advisor to the Nevis Island Administration, Mr. Theodore Hobson, Permanent Secretary, Education, Mr. Elvin Bailey, Principal Education Officer, Mrs. Jennifer Hodge and staff of the Charlestown Secondary School and a cross section of the community, that the school does not have to adhere to his suggestion, but he was placing on record a specific request of the school.

Principal Elliot thanked the Minister for his kind gesture saying, “While we have had good contribution from the Nevis Island Administration with respect to the Charlestown Secondary School, we continue to look for help from other persons and certainly so, this evening what Mr. Perkins is saying is that he too would like to join in and make a contribution to the Charlestown Secondary School.”

Permanent Secretary, Education Mr. Elvin Bailey gave brief remarks on behalf of the Ministry of Education while Ms Herbert expressed gratitude for her achievements.  Other persons at the ceremony extended congratulations to Ms Herbert and wished her all the best as she pursues her future at a US college in Florida.