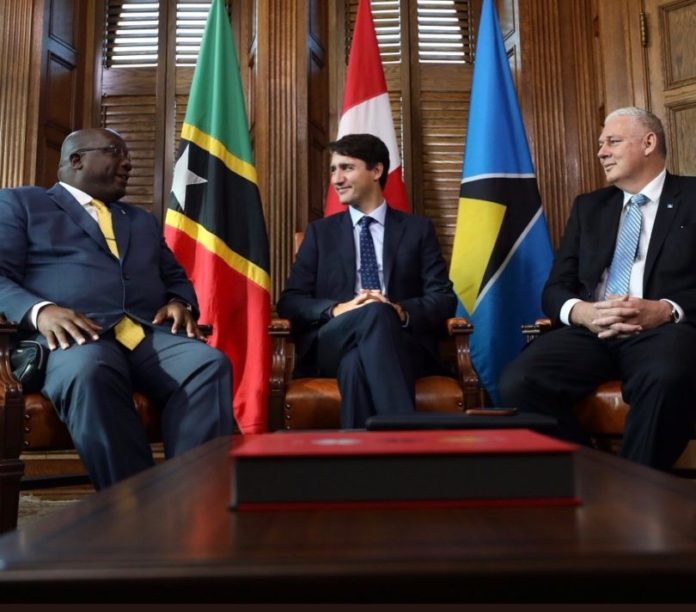 While there, the delegation met with senior executives of the Canadian banks operating in member states of the OECS, namely, the Bank of Nova Scotia, Royal Bank of Canada and the Canadian Imperial Bank of Commerce (CIBC).

“These three banks are important entities in our sub-regional financial space,” Harris said. “They bring to the OECS a mix of international banks of high repute and strong credibility. The Canadian banks emerged from the global financial crisis with the strongest balance sheets. Their presence, then, in our region brings confidence in our financial space and the service of strong correspondent banks to our region.”

De-risking and withdrawal of correspondent banking relations were among areas of concern for the monetary council.  The prime minister said that it was determined that all matters raised were the subjects for ongoing discussions and would be “put to technical teams from both sides to pursue and establish protocols for resolution of the issues.” He added that the meetings represented a productive and very auspicious start to constructive engagement with the foreign banking sector.

“Prime Minister Allen Chastanet and I held consultations with Prime Minister Justin Trudeau of Canada,” Harris said. “The issues here were broader than those discussed with the Canadian banks, although those subjects were addressed and we urged Prime Minister Trudeau to use his good office to assist us. Our delegation explored the role of Canada in the region and how we can forge a mutually beneficial relationship.”

According to the prime minister, among the wide ranging issues discussed with Prime Minister Trudeau were Canada’s leadership of the upcoming Group of Seven (G-7) meeting, its role in the Commonwealth and how it can become the voice of advocacy and support for Small Island Developing States (SIDS).