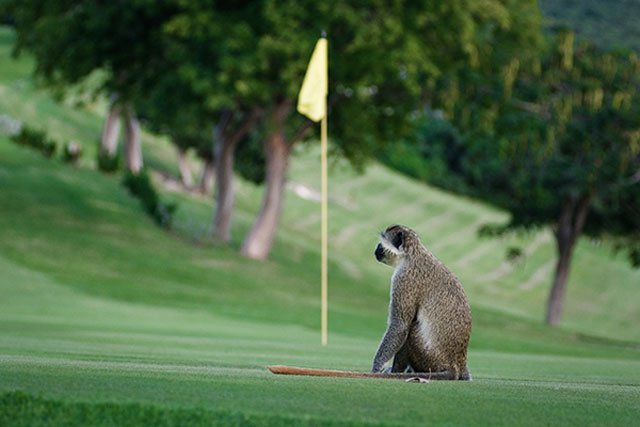 Farmers on the island may soon benefit from research and initiatives  being established on Nevis and soon in St. Kitts to reduce the number of monkeys in the Federtion.

Vernon Gibbs-Hall, Field Biologist in Ethnoprimatology,  arrived to start a project to address the growing issues surrounding the monkeys. His research on monkeys on the island in ran from November to December 2015 and he returned in September of last year. A donation of EC100 000 from the Chinese government, a non for profit company called Arnova Sustainable Future, has partnered with the Department of Agriculture on Nevis to find ways to address the human-monkey conflict here.

Speaking with the Observer on Thursday,  Mr. Gibbs-Hall said there are other ethical ways of reducing the monkey population without eradicating it.

“The idea is not to eradicate all the monkeys, it is to bring a balance of what what numbers are going to be acceptable. The tourism industry relies heavily on monkeys. because ople who come to the island want to see the monkeys and tourism is great revenue for the islands,” he said.

He added that wild life activists are against the killing philosophy.

“St Kitts and Nevis come under a lot of pressure from the animals rights activates group because of the way the monkeys are handled.  We can’t be seen doing this. Monkeys are sensitive, they can see, they can feel they can feel pain as much as a human do .They share 91 per cent of our DNA,” he said.

He warned that by trying to kill the monkeys more monkeys will appear.

“If you shoot a monkey another one will take its place and general when an animal species like the monkey, if you shoot a lot or you kill a lot , what actually happens is that it increases its birthrate and reproductive rate . You may end up with far more monkeys than you started with,” he said.

Gibbs Hall revealed that the monkey was a first brought to the island by The French as pets. The monkeys then escaped, and are now living without natural predators like eagles or leopards and were able to  over populate.

“There wasn’t a problem with monkeys when you had the sugar cane industry , because  the sugar cane acted as a buffer going up the sloops of the volcano and that buffer is to keep the monkeys at bay. They didn’t really come down to the lower end.” he said.

He noted that farmers in the Federation have lost between EC $2-$4 million because of monkey agriculture crop raiding.

Gibbs-Hall said during his time on the island he interviewed many farmers and discovered farmers spend much less time on their farms than in the past.

“They can’t guard their farms against monkeys, which is quite tragic,” he said.

Part  of the initiative, he said, is to set up feeding stations on the upper sloops of the volcano. Feeding station tables with peelings and fruits in the mountain can be created to lessen the impact the monkeys have on the agriculture crop.

He said that later this year they will be looking at sterilization of the monkeys in conjunction with the Ross University. In addition to the feeding station is the introduction of Reforestation in the mountains provide a feeding ground for the monkeys that will build up buffer zones.