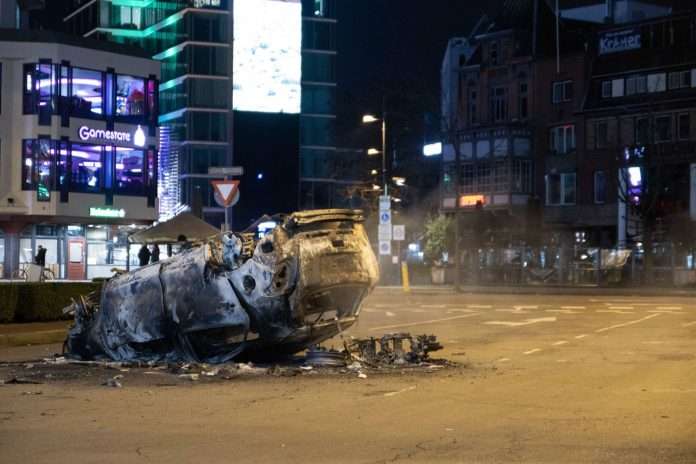 A third night of rioting has shaken the Netherlands as protesters rampaged through towns and cities around the country after government introduced a night-time curfew.

About 150 people were arrested on Monday in Amsterdam and Rotterdam, where shops were vandalised and looted, and the mayor, Ahmed Aboutaleb, issued an emergency decree giving police broader powers of arrest.

“These people are shameless thieves, I cannot say otherwise,” he said. “I had to threaten them with the use of teargas – a far-reaching measure. I find that sad, because I have never had to do that in my entire career as mayor.”

But trouble also flared in smaller centres around the country such as Den Bosch, Zwolle, Amersfoort, Alkmaar, Hoorn, Gouda – where several cars were set on fire – and Haarlem, where police were attacked with stones.

Officials said the rioters, who reportedly used social media apps to organise, were overwhelmingly teenagers, and questioned the extent to which they were motivated by opposition to the 9pm curfew, which came into force on Saturday.

“This is serious disturbance of public order,” said the mayor of Haarlem, Jos Wienen. “The measures are tough for everyone, we all want to be free to move. But that does not entitle anyone to start fires, let off fireworks and commit vandalism.”

The prime minister condemned the weekend riots in which anti-lockdown protesters attacked police and set cars on fire. “What motivated these people has nothing to do with protest; this is criminal violence,” Mark Rutte said.

Police said 300 people were detained on Saturday and Sunday after youths threw rocks and in one case knives at officers, attacked a hospital and burned down a Covid testing station. More than 5,700 fines were issued for breaking the curfew.

Bars and restaurants have been shut in the Netherlands since October, with schools and non-essential shops following suit in mid-December. Infection numbers are falling but authorities fear the possible faster spread of the UK variant of the virus.

Rutte’s government is acting in a caretaker capacity before the election, scheduled for 17 March, after resigning last week over a child benefit scandal.

Koen Simmers, the head of the national police union, told Dutch television officers were prepared should the rioting continue. “I hope it was a one-off but I’m afraid it could be a harbinger for the days and weeks to come,” he said.