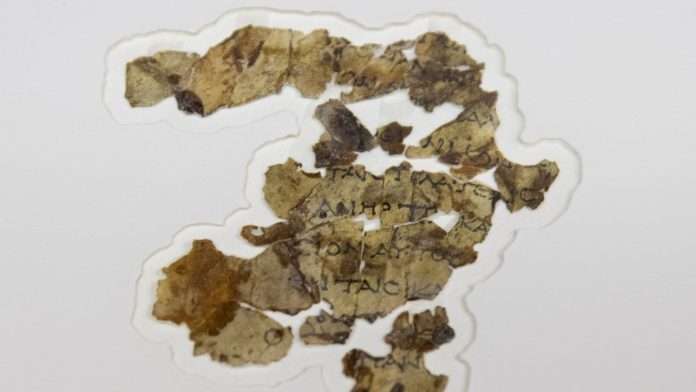 Israeli archaeologists have unearthed two dozen Dead Sea scroll fragments from a remote cave in the Judean Desert, the first discovery of such Jewish religious texts in more than half a century.

“For the first time in approximately 60 years, archaeological excavations have uncovered fragments of a biblical scroll,” the Israel Antiquities Authority (IAA) said in a statement.

More than 20 bits of parchment were found after teams rappelled down an 80-metre cliff and scoured the Cave of Horror, so called due to its precarious position and because 40 skeletons of women, men and children were found there during excavations in the 1960s.

Jewish rebels are believed to have hidden in the canyon south of Jerusalem two millennia ago to escape a Roman advance. The fragments from the Hebrew Bible may have been stashed in the cave during the Bar Kochba Revolt, a Jewish uprising against Roman Emperor Hadrian, between AD132 and AD136.

The IAA said the scrolls it found were Greek translations of the books of Zechariah and Nahum from the Book of the Twelve Minor Prophets, and were radiocarbon-dated to the 2nd century AD. The name of God is written in Hebrew.

One fragment read: “These are the things you are to do: Speak the truth to one another, render true and perfect justice in your gates.”

Following a years-long dig across caves and cliffs, the authority said it had also discovered a six-millennia-old skeleton of a child and a basket it described as the oldest in the world, at over 10,000 years.

The authority had commissioned the operation in 2017 following reports of plundering.

IAA director Israel Hasson said the findings were “a wakeup call” for devoting more resources to continue the project and said it had only surveyed half the cliffs so far.

“We must ensure that we recover all the data that has not yet been discovered in the caves before the robbers do. Some things are beyond value,” Hasson said.

Sections of the dig took place in the occupied West Bank, a part of the Palestinian territories, a common Israeli practice that has led to controversy. The IAA coordinated with the defence ministry, which runs the occupation.

The original Dead Sea scrolls, a collection of Jewish texts, were also found in desert caves in the West Bank. However, they were discovered by nomadic Bedouin shepherds in the 1940s and 1950s.

Those texts included sections of the Hebrew bible 1,000 years older than any previously known copy and revolutionised the understanding of Judaism from which early Christianity emerged.