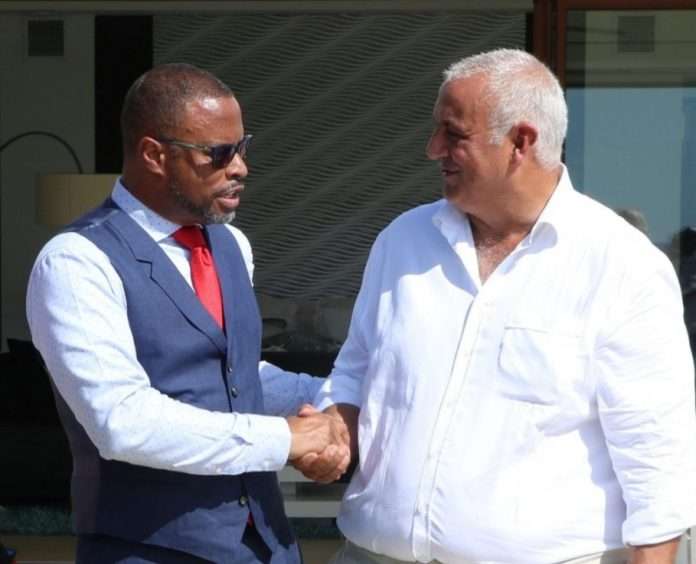 The first of the movies filmed on Nevis by MSR Media will be released globally on Valentine’s Day, February 14, with plans for a free showing in Nevis ahead of the release date.

Premier of Nevis Mark Brantley said his administration has gone in a very aggressive way to develop a movie industry on the island.

“We have been blessed that some four movies were filmed here last year.

The first of those four movies will be released worldwide on February 14.

“The first of those movies is ‘A Week in Paradise.’ That will be on all major streaming platforms.”

Brantley said Nevisians will be afforded the opportunity for those at home and those abroad to see the country in living display.

He disclosed that following a conversation with Philippe Martinez of MSR Media, a free premiere screening was offered for the people of Nevis.

“That will happen before the international release and it will be a free event; an event we are seeking to organise at the Malcolm Guishard Recreational Park.

“The idea is for you to come with your families and to see the very first movie made in Nevis released on big screens, on free public screening, for the people to come out and see themselves,” Brantley said.

He added that they have talked about the movies, but this is the time Nevisians will get to see what has been created using Nevis.

“The real star in these movies is the island of Nevis.

I believe this is a phenomenal thing, a great development, and I did not myself think it possible. But the impossible has been made possible – that we all together will be able to have a free screening of this movie “A week in Paradise.”

Brantley said the details of the Nevisian showing are still being organised.

“We look forward to this, and we think that it is good news for us, and an excellent way to bring home the reality of the music-making business to the people of Nevis.

“It is not just chatter, not just the Premier talking about it. It has actually happened, and you can see it happening in the ground.”

Brantley said that throughout they have been in regular contact with MSR Media, as they were their preferred partners when they started this journey.

“It is quite interesting that the two islands have an opportunity to build something.”

The Premier said that going forward, he thinks they are going to attract others to come to the island and see what the Federation can offer.

“One of the selling points has been the ease of operating here. Things like closing a road for half an hour in other countries is very difficult. Here, we have been accommodating.

“It has gone well, and it is my hope – and I am told they should film four movies this year – if that works out we would be in good nick and a good position to continue this industry.”

He added that MSR Media are also engaging in St Kitts.