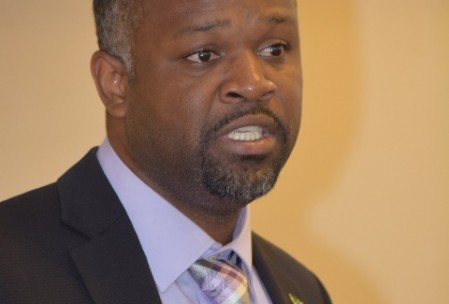 Basseterre, St. Kitts – Opposition Parliamentarian Konris Maynard has called on the government to do more in relation to the crime issues in St. Kitts and Nevis and has charged that they are not serious in the reduction.

Maynard, making a presentation in parliament on Tuesday on a bill that would see stiffer penalties for gun crimes, indicated though he supports the harsher punishments, the government ought to do more if seriously addressing the crime situation.

Maynard slammed the prime minister and minister of national security, Dr. Timothy Harris, for addressing the nation in relation to the Ren Biao incident, but falling to do so in a week when a young businessman was killed and a teenager went missing.

“Shortly before that, we had the killing of a young businessman, gunned down in his vehicle,” Maynard said. “We had a teenager gone missing and, as far as I know, is still missing. From then to now, we’ve had four, five, maybe even six other murders and as the member for No. 2 said, [we have had] absolutely nothing from the gentleman responsible for national security.”

Maynard continued by stating that the last time the National Assembly met, the prime minister rightly gave regards to the terrorists attack that happened in Manchester, but gave no mention for the killings and “the heartbreak and the agony of the people of St. Kitts and Nevis.”

“Because he has faced severe criticism for his missing-in-action approach to crime, we have a bill to increase firearms sentence from 10 years to 15 years,” Maynard said. “This is not enough.”

Maynard also referenced the crime statistics in St. Kitts and Nevis for 2016, stating that was the government’s full year in charge of the affairs of the country, which saw significant increases of major crimes, including gun related incidents.

He argued that government officals campaigned on the issue crime, stating they were “the better option,” but with increases during their first full year in office, they should be removed. The parliamentarian then charged that the government doesn’t appear to be serious about the reduction in crime and the bill does nothing to change that perception.

“The perception in the public sphere is that the government is not at all serious about its attempt to lead in the fight against crime,” he said, “and having a parliament [doing] a small portion of crime-fighting so that [they] can wave it up in a press conference to say, ‘look we have done this, we have done that,’ [is] much like [past] bills for show … appearing in this house.”