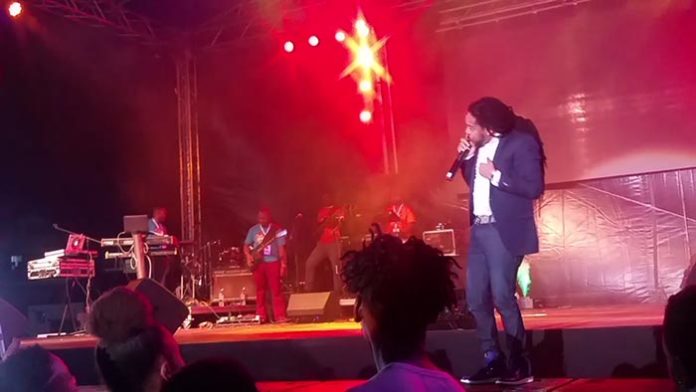 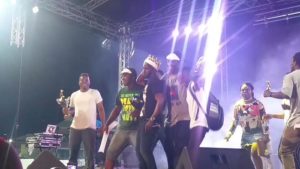 Bjorn Bassue more popularly known by his stage name Mr. Hype for the third time in five years has been crowned Sugar Mas Soca Monarch and is promising bigger and better things from his group for 2018.

Mr. Hype who won the favour of the judges last Friday with his jumpy “Crazy People” tune topped the competition with 591 points, closely followed by Rucas H. E with 581, Dejour 555, LAX KT with 547 points.

Mr. Hype who won the competition in 2013 and 2015 also, appeared on stage in a diaper and a pseudo umbilical cord depicting that he was crazy since he was born. The performance was well received by the small audience who jumped and waved as he performed and some even screamed as the song requested.

He added that he and his team always try to bring original content and thinking outside the box when it comes to his performances. “We tried as hard as possible to keep my music and my performance original as possible. We tried to come with ideas and concepts that was outside of the box things that nobody else would have been thinking of or nobody would expect.”

The unorthodox soca artiste noted that they often try to produce music that people attracted to and is one of the reasons behind his success.

“People like funny things, people like humour and people like fun and excitement…and once that element is there we know for sure that we are going to be separated from the pack.”

This year for the soca monarch the carnival committee decided against having a groovy and power categories as was done in previous years and merged the two into one competition.

For winning the competition Mr. Hype will pocket $11,000 and will also receive the opportunity to record a single with a group based in Barbados.