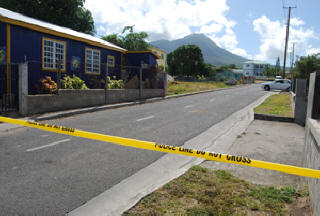 (Ramsbury, Nevis) Ð Police responded to a report of a shooting at approximately 12:45 a.m. Wednesday, but found nothing. A body was discovered by a passerby at the edge of Marion Street in Charlestown shortly before 5 a.m. with multiple gunshot wounds.

Police went to the scene and found the body of Leon Hendrickson, 29, of St. Kitts, who resides at Stoney Grove, Nevis. He was walking home when he was shot.

The district medical doctor visited the scene and pronounced him dead. An autopsy will be performed to determine the cause of death.

One resident of Ramsbury said they heard about a dozen shots fired.

The Nevis Island Administration expressed concern over the latest killing.

“We are very disturbed about this violence,” said Deputy Premier Hon. Hensley Daniel. “There must be another way to resolve conflict.”

The NIA has a long list of programs directed towards the youth of the island in hopes that it will prevent crime, the Minister said.

“We are spending a huge amount of money on programs for social intervention, education, cultural programs, rehabilitation for those who have had trouble with the law before, counseling,” said Minister Daniel. “There are always some people on the fringe who don’t get covered by the net, but we are working on it. We are working and the Administration is committed to stopping this violence.”

Public opinion on the matter varies on the subject from complacency to nearly encouragement for the crimes. People would only discuss the matter if there names were not printed.

“Bad people killing bad people, they should keep up the good work,” said one woman.

“Another shooting? It probably wasn’t anyone I know, so it doesn’t bother me,” said another man.

The 10th murder of the year occurred late last month. According to the police, they responded to a report of gunshots being heard in Molineux on Thursday, May 22, at about 8 p.m. On arrival they found Eston Sharry, 23, alias ‘Phat’ of Phillips Road, Molineux, lying on his back in the road. He had multiple wounds to his body and was motionless. The District Medical Doctor visited the scene and pronounced him dead. There have been no arrests in this case

The ninth murder of the year was three days before that. Police are investigating the ninth murder to date which claimed the life of Chesil Fraites Richardson, 25, of Conaree Village. No one has been arrested in this case.

On Monday, May 19, at 9:21 p.m., police responded to a report of gunshots in Conaree and found the body of Mr. Richardson on its back on a bench. He had wounds to his neck and head, the police report stated. He was pronounced dead at the scene by the District Medical Doctor.

On Monday, April 7, Lionel Warner, alias “Shaggy” of Dieppe Bay was arrested and charged for the murder of Alphonso Richards, 25, alias “Bobo Hortical” of St. Pauls Village. The murder was committed on Saturday, April 5. During an altercation, Mr. Warner allegedly stabbed Mr. Richards in the abdomen. Warner subsequently surrendered himself at the Basseterre Police Station .

Wycliffe “Wicked” Liburd was charged in the gun murder of Charles Matthew. Mr. Matthew was gunned down on Apr. 18 shortly after 11 a.m.

Bishu Issac surrendered to police on April 19 and on April 22 was charged in the murder of Tau Gowan, 26. At about 8 p.m. on April 18, 2008, police responded to a report of stabbing at the junction on Market and Central Streets, where they found Mr. Gowan dead at the scene.

Police have yet to make arrests in the murders of Leon ‘Gravo’ Westerman, Derrick ‘Jake’ Gumbs Jr., Leon Willock and Orlando ‘Snoop’ Williams.