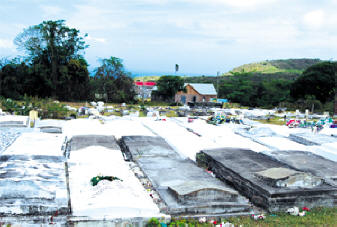 (Molineux Site, St. Kitts)—The relatively calm communities of Molineux and Phillips were shaken by the shooting death of Eston Dejaun Sharry on the Phillips Road that links both communities. It was a road much traveled by Eston. It was the road on which he was murdered in cold blood.

Scores of Molineux and Phillips residents gathered at the crime scene, cordoned off by the police, trying to get a glimpse of the young man lying dead in the road.

According to the police, they responded to a report of gunshots being heard in Molineux on Thursday, May 22, at about 8 p.m.

On arrival they found Eston Sharry, 23, alias ‘Phat’ of Phillips Road, Molineux, lying on his back in the road. He had multiple wounds to his body and was motionless. The

District Medical Doctor visited the scene and pronounced him dead.

Eston’s murder brings to 10 the number of persons to have been killed since the start of the year. It was the second murder in the Molineux community in a little under 15 months.

Nigel ‘Daffy’ Henry, 24, was murdered on Feb. 27, 2007 after leaving his place of work, The St. Kitts Biomedical Research Foundation (Monkey Farm) at Bourryeau Estate. Darnell Govia of Phillips Village was charged with the brutal murder of Mr. Henry while six persons of the Molineux and Phillips areas at the time were taken into Police custody to assist with the investigation. To date no one has been convicted with Nigel’s murder.

Mr. Eston, up to the time of his untimely demise, was also a worker at The St. Kitts Biomedical Research Foundation and at one point was a co-worker with Nigel Henry.

According to his mother, Yvette Sharry, Eston used to go to work but on the day he was murdered he didn’t go to work. She said he seemed troubled on that day but he was not the kind of person to speak.

“He doesn’t communicate at all,” Yvette said.

“I’m kind of sorry that he went that way. He wouldn’t listen to me when I used to speak with him about the kind of company he kept,” she said.

Dr. the Honourable Timothy Harris, Member of Parliament for Constituency # 7 decried the murder of Eston.

“I want on behalf of the people of Constituency #7 to express our outrage at the killing of Sharry in the flower of his youth.  I want to express sympathies to Yvette Sharry, a mother now in mourning, and the brothers, sisters and all of his other relatives.  I share their pain and loss, hurt and befuddlement.  No family deserves to lose anyone in such terrible and wicked circumstances,” Dr. Harris said.

“As a young nation we need to always be mindful of the painful fact that every time a citizen is struck down we set back our family lives, our communities and the country as a whole.  This wanton destruction of lives engenders unimaginable hurt and suffering to all concerned and it also makes us less of a people,” he continued.

Mr. Sharry’s mother, Yvette, said that the once amicable relationship between Eston and his father, Leonard Percival, was strained because of Eston’s poor communication and attitudinal problems.

However, Yvette hopes that justice will be served and that Eston’s killer or killers would be brought to give an account of their heinous crime.

On May 23, an autopsy was performed on the body of Eston Sharry by Dr. Stephen Jones who reported that the cause of death was due to gunshot wounds to the chest and abdomen with hemorrhage and shock.

Investigations are ongoing. The Police are appealing to persons with information to call the Criminal Investigation Department at 465-2241 ext.236, 220 or 230, or the crime hotline at 707. Information received will be treated with strict confidence.