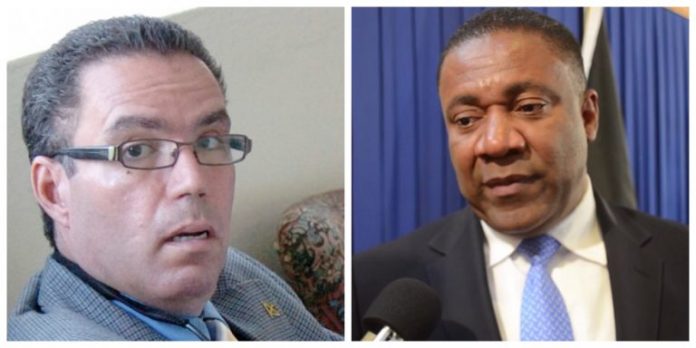 KINGSTON, Jamaica – The US visitor’s visas of Daryl Vaz, the Minister without portfolio in the Ministry of Economic Growth and Job Creation, and Phillip Paulwell, the Vice President of the People’s National Party (PNP), have been revoked.

The news broke earlier this when both high-profile politicians confirmed the cancellation. Vaz was the first to confirm the news in a public statement in which he indicated that he would resign from his ministerial position if his US visa was not reinstated.

He has also shared correspondence from the US Embassy which informed him that “Subsequent to the visa issuance, information has come to light that you may be ineligible for a visa. If you would like to travel to the United States, you must re-apply.”

Paulwell, on the other hand, was in Cuba at the time of the news report and had to make checks with the PNP to confirm that his visa was indeed cancelled.

Following the reports, National Security Minister Dr Horace Chang confirmed to the public that both politicians had their visas cancelled, along with several high-ranking members of the Jamaica Constabulary Force.

Chang said that he is of the belief that the United States is acting on the basis of individual merit, rather than targeting the Holness administration.

Contrarily, the former Jamaican ambassador and deputy permanent representative to the United Nations, Curtis Ward, said that the Trump administration may be using visa revocations as a warning to the Holness Administration and other Caribbean governments that have diplomatic ties with Cuba and Venezuela, both of whom the US has strained relations.

While neither minister has publicized the specific reason for the US embassy’s revocation of their visa, it is a fact that being unable to travel will put a strain on their duties. If Vaz and Paulwell now have official ministerial duties in the United States, they will now have to send a representative on their behalf.

Several senior politicians of the Holness administration, including Vaz himself, have expressed shock over the US’s decision to cancel the minister’s visa.

In 2008, Daryl Vaz famously renounced his US citizenship after his election to the House of Representatives in 2007 was deemed ineligible by virtue of his dual citizenship.

Phillip Paulwell, who was initially not aware of the revocation, said that he will be in touch with the US Embassy in Kingston to seek clarity on the issue.

“I have received the news and subsequent confirmation that my visa issued by the United States of America has been revoked. No reasons have been provided. However, they have advised that if I intend to travel to the US, I would need to reapply for a US visa”, he said in a statement.

Minister of National Security, Dr. Chang said that he has also been in contact with the US embassy to seek clarity on the matter. He says that the jobs of the two ministers may be in severe jeopardy if they cannot get their visas reinstated.

This incident is not the first time that high-ranking politicians or government ministers have had their visas revoked by the United States. In 2011, the then Minister of Mining and Energy, James Robertson quit the Brue Golding-led administration after his US visa was revoked.