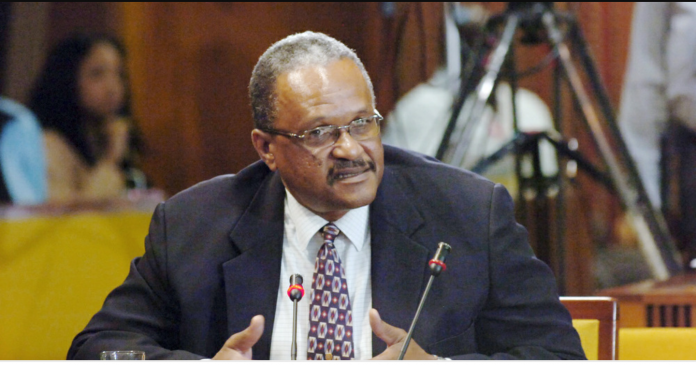 National Security Advisor Major Gen. Stewart Saunders, a retired head of the Jamaican Defence Force, indicated the Federation ought to use his homeland as an example in their fight against crime and not allow society to deteriorate the levels it has in Jamaica.

“You really don’t want to reach a situation like what has happened in Jamaica. You should learn from that and not try in any way shape or form emulate that.”

He however noted that the policies that are being put in place he believes are ones that will provide the required solution. “We have to develop and be able to sustain a society that is safe, secure and stable with a high respect for law and order.”

Saunders also called for the removal of the attractiveness of crime. “We have to remove the profit from crime. We have to develop and maintain an effective justice delivery system. We have to ensure policing by consent, meaning effective and efficient community policing regimes and practices.”

He also spoke to other measures he believes can have long term positive effect on the crime issue in St. Kitts and Nevis. “Dismantling of the gangs is a critical achievement which we are all working towards. We must protect the vulnerable by focusing on the at risk population. Strengthening governance and oversight structures and mechanisms to ensure that what we put in place is not only sustainable but is being applied in the correct manner.”

Osmond Petty Permanent Secretary in the Ministry of National Security noted that the ministry has already begun to make strides in trying to make societal changes with initiatives such as the explores TAPS and social interventions programmes.

“We have to stop those young people from going into gangs. We have a difficulty dealing with those who are already in gangs right now, but we can stop younger people from getting in there,” he said.

He noted that social intervention was necessary for some vulnerable children. “We have the gangs, but we also have a lot of bad things happening in the homes and society that is not gang related and we have to find a solution assisting those children when they find themselves in those situations.”

Petty continued, “We need to bring up our children to see that as unacceptable behaviour under any circumstances. And that is what we are trying to work on, that is what I call an holistic approach in fighting against crime that has been lacking up to now.”

He also indicated that community policing will also play a critical role in curbing the wave of crime.

“It is something that I have been pushing and will continue to push but I think it is critically important now because the homicides and the other types of crimes are there. I have been pushing for more foot patrols with police going into the communities and actually developing trust and confidence. St. Kitts and Nevis is still a place where people still trust police.”