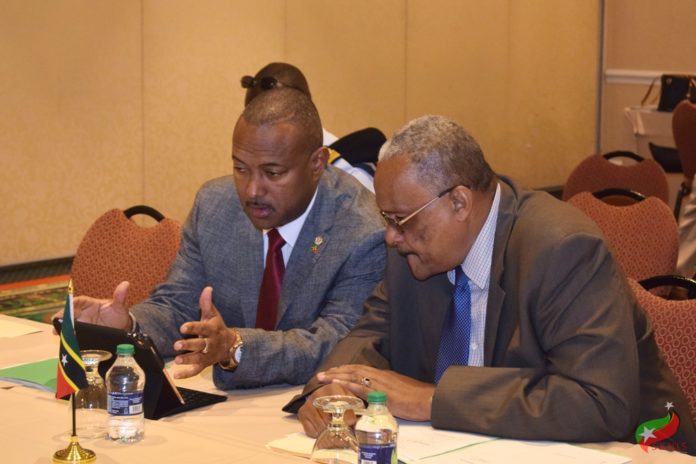 Basseterre, St. Kitts – At the recently concluded Sixth Meeting of the Caribbean Basin Security Initiative (CBSI) Commission, the St. Kitts and Nevis delegation focused on crime prevention and climate-related challenges. National Security Advisor Maj. Gen. (Ret.) Stewart Saunders presented on both areas, which were adopted as items for the agenda of the meeting upon the suggestion of the St. Kitts-Nevis delegation.

The CBSI Commission Meeting was held at the St. Kitts Marriott Resort Oct. 26-27 and was chaired by Osmond Petty, permanent secretary in the Ministry of National Security. The CBSI brings members of the Caribbean Community (CARICOM) and the Dominican Republic together to collaborate on regional security with the United States as a partner.

Where crime prevention is concerned, Saunders said that they were looking to find workable solutions to address a number of issues, such as how information and intelligence are being shared within states and across the region.

“We are confronted with a number of issues, whether it be illegal arms, drugs, ammunition, that sort of stuff,” he said. “We are also confronted with the core questions of how we rehabilitate [people], and what social intervention programs are necessary.”

On the matter of climate-related challenges, he reported that 2017 is officially one of the most active years where hurricanes or monster storms are concerned.

“We have to look at ways and means we can better protect or secure our human capital, which is the greatest resource that we have in the region,” he said. “We have to ensure that we have certain systems in place that allow for continuous governance…immediately after a hurricane has passed so that things can be put back on stream again as early as possible thereafter.”

He said that the region also needed to give greater consideration to provisions made for taking care of vulnerable groups, such as the elderly.

“We have to decide now ways to prevent situations that we are faced with, whether countries have to look into providing…proper shelters as part and parcel of their…infrastructure to preserve the safety and security of the people,” Saunders added.

The U.S. and Caribbean countries have identified three core objectives to deal with the threats facing the Caribbean: