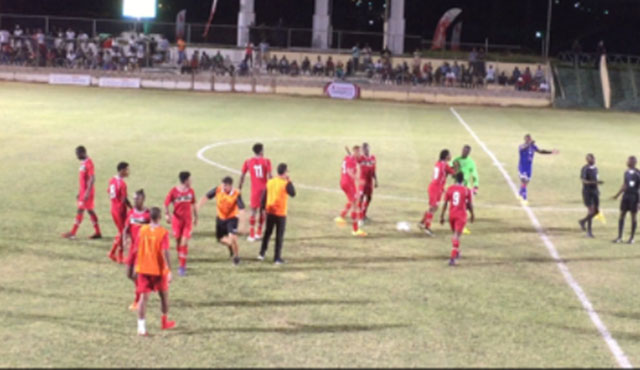 Two St. Kitts and Nevis National Team players have been suspended after an on-field fight with Haiti players during the Round 3 of the 2016 CFU Scotiabank Caribbean Cup match. The matchtook place at Warner Park on Sunday, Nov. 13.

The matter took place during half time in extra time shortly after St. Kitts and Nevis fell 1-0 to Haiti when goalkeeper Julani Archibald and Defender Jason St. Juste got into a heated argument that grew into an on-field fight that resulted in the latter being sent off and the former receiving a yellow card on the night.

In a release the St. Kitts-Nevis Football Association (SKNFA) announced that Archibald had been slapped with a six match suspension and instructed to attend anger management counselling and to submit a report from the counsellor documenting his attendance and progress with anger issues.

Both players are also required to submit a letter of apology to the SKNFA, coaches, teammates and patrons for their actions.

Cayon back to summit of SKNFA Premier League

Defending Champions Cayon Flow 4G Rockets have moved back to the summit of the SKNFA Premier League with a 2-0 victory over Old Road Jets and S L Hosfords St. Pauls suffering their second straight defeat played at Warner Park on Saturday evening.

After coming from behind to beat Rams Village Superstars 2-1 on Thursday evening the defending champions returned two days later to and dominated the team from Old Road and record a comfortable victory that powered the to the to of the standings.

For Cayon Carlos Bertie opened the scoring with a flick off his head on the line in the 12th minutes to give the champions an early lead. Bertie then popped up in the opposition penalty area to cap off a good move by the Cayon side to double their lead in the 44th minute.

In the second half though it was dominated by Cayon they failed to add to their advantage.

Following suffering their first defeat of the season to Garden Hotspurs earlier in the week St. Pauls aimed to get back to winning ways against a Conaree side who were looking for some consistency following an indifferent start to the season.

The game opened with both teams aiming to make and immediate impression however the goalkeepers remained largely untested for the early part of the first half.

The deadlock in the game was however broken in the ….minute by…. who finshed with a volley of the highest quality leaving Uzal Hodge in the St. Pauls hopeless of stopping the shot.

On the other side of half time the game became more physical  that led to many layers having to leave the field for treatment  and also resulted in one Conaree player taken to hospital with blood coming from his mouth.

However,  on …. minutes Hodge in goal for St. Pauls was shown a straight red for violent intent shown following a plat in his penalty area. An upset Hodge plead his case to the referee Nickolas Rose who denied any protest and a fuming Hodge then punted the ball into the bleachers.

However, following that incident the referee’s decision to award an in direct free kick inside the 18 yard box to Conaree instead of a penalty kick left members of the audience confused as to whether or not he had made the right decision. The resulting free kick was in was properly dealt with by the St. Pauls defenders.

A goal down St. Pauls increased their offensive tempo as they sought to pull back the game as time slipped away, but in doing so left many gaps in their defence that Conaree aimed to exploit.

On a Conaree break away in time added on the Conaree striker broke away from his markers and face a one on one challenge with goalkeeper Jamal Francis who sped out of the goal and made what seemed to be a successful tackle, where he avoided contact with the striker and ricocheted the ball out of danger.

However, the referee decided to award Conaree a penalty kick that both St. Pauls and Conaree fans agreed ought not to have been given.

The resulting penalty kick had been brilliantly saved by Francis. Shortly after the save the referee blew his whistle signalling the end of the game.

Also on Saturday, the Garden Hotspurs recorded a 8-1 victory over Sandy Point, who continue to have a miserable season in the SKNFA Premier League.

On Sunday, two more games took place at Warner Park with Winners’ Circle Newtown United on the back of goals from Dakari Phipps in the 4th minute and Ronaldo Belgrove in the 61st minute recorded a 2-1 victory over struggling SPD.