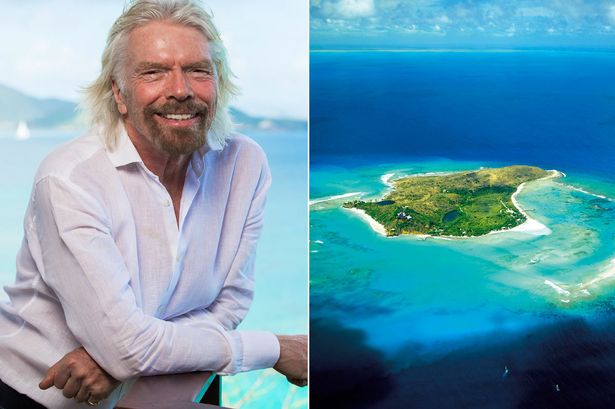 MirrorOnline– Richard Branson has been the proud owner of Necker Island in the Caribbean since 1978 when he bought it for around £150,000.

The businessman, who was just 28 at the time, went on to transform the tropical paradise into one of the world’s most exclusive resorts.

However, he now risks losing his precious island as the coronavirus outbreak threatens his business empire.

Branson’s Virgin Atlantic is teetering on the brink of going bust, so he has has offered to put Necker up as collateral in a bid to get a government bailout to save his airline.

If the entrepreneur loses control of the resort, it would be a massive blow to him after spending 40 years being the caretaker of the stunning private paradise.

From celebrity guests to weathering natural disasters – here’s a look at Necker Island across the years.

From desert island to luxury resort

Branson first set eyes on Necker during a trip to the British Virgin Islands in 1978, when he found out he could potentially buy himself a tropical bolt hole.

He was trying to impress his girlfriend, Joan, at the time, so he whisked her away on an island-buying trip.

The businessman successfully wooed his girlfriend, who later became his wife, and eventually managed to negotiate the seller down to a £150,000 asking price for Necker.

The deal included a clause that Branson had four years to turn the island into a resort – so he poured his cash into the project.

Necker Island was born, and he married Joan at the resort he built there 11 years later.

No expense was spared in the creation of Necker Island resort as Branson set about creating a Balinese-style villa perched on top of a hill above the beach.

The building was erected using local stone and Brazilian hardwoods, while the hotel was filled with Asian antiques, Indian rugs, and art, fabrics and furniture shipped in from Bali.

The 10-bedroom villa was designed with open walls to give guests a 360-degree view of the ocean and beach.

In addition to the hotel, there are also private swimming pools, tennis courts and water sports available to keep guests busy during their stay.

It was originally designed to accommodate around 30 guests, but capacity was recently expanded to 34 with around 100 onsite staff.

To book yourself a place at the exclusive resort, it will set you back around £4,000 per guest a night.

Branson himself has a private home named Temple House on the island, which he rents out for £5,510 a night when he’s not in residence.

There is also a private villa called the Love Temple, which can be rented for £3,418 a night.

Also on the property are six Balinese villas, which cost £3,713 to rent a night.

Necker Island quickly became a private playground for Branson’s famous friends, with some of the world’s most well-known stars paying a visit.

He famously hosted Princess Diana and her two young sons, William and Harry, in 1990, and Harry has returned several times over the years.

Other royals to have visited Necker include Sarah Ferguson and her two daughters.

Rolling Stones legend Ronnie Wood chose Necker for his 2012 honeymoon with third wife Sally, while others to have holidayed there include Harry Styles, Mariah Carey, George Michael and Demi Moore.

Mel Gibson was reportedly so impressed with the resort, it inspired him to buy his own island in Fiji.

It’s also welcomed famous faces from the world of politics, with Barack and his wife Michelle, Tony Blair and Nelson Mandela all making trips there.

Branson was dealt a devastating blow in 2011 when the main hotel burned down after being struck by lightning during Tropical Storm Irene.

Around 20 guests were staying there at the time, and actress Kate Winslet was hailed a hero for rescuing Branson’s elderly mother Eve from the blaze.

The building was repaired and reopened in 2013, but Necker was hit again in 2017 when hurricane Irma hit – destroying much of the site.

However, Branson bounced back yet again by rebuilding the hotel and reopening with a swanky new look in 2018.