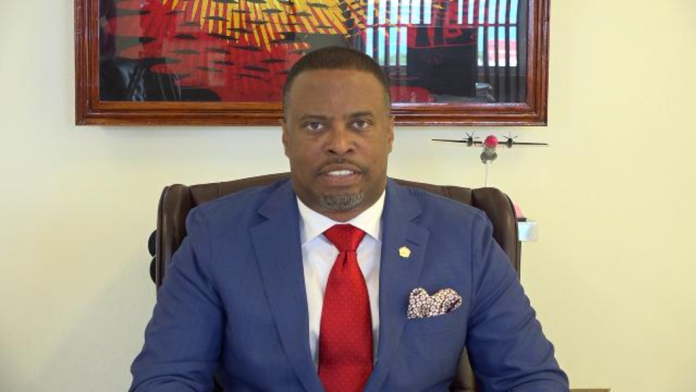 Nevis Premier Mark Brantley has renewed calls for Nevisians to get vaccinated. During a press conference, he announced that if the vaccination rate doesn’t increase to a satisfactory level, he will be inclined to mandate it.

He said the evidence around the world and at home in Saint Kitts and Nevis is clear, “those who are dying in disproportionately large numbers are unvaccinated. Those who are suffering and going to hospitals and struggling with this disease and being most afflicted by it, overwhelmingly are unvaccinated. It’s to the point where I believe it is a truism that COVID has become a disease of the unvaccinated.”

Responding to questions posed by the media about whether or not the island has the legal framework in place to implement mandatory vaccination, the Premier said yes.

“Because of the nature of COVID, ones individual right, whatever that may be, can be overridden in the context of saying that whatever mandate is necessary to save lives. I think that is important because any constitutional lawyer will tell you that whatever rights you enjoy in the constitution, there’s a call-out, there’s always an exception for something that is reasonably required in a democratic society.

“So what is important your right to not take a vaccine or the right of others to not be infected by a deadly disease that has come to kill. That really is the debate and I have seen some advice that has been given to governments across the OECS; a legal opinion that was written by our former Chief Justice of the Caribbean Court of Justice Sir Dennis Byron and Professor Rosemary Bell-Antoine who is a Professor at the University of the West Indies and an expert in Labour law- that opinion concluded that governments had the authority to mandate.

“What you’re now seeing is governments- Saint Vincent and the Grenadines, you’re seeing it in Antigua and Barbuda, I’m told in Guyana as well, that governments are mandating it. In Antigua now, as their Prime Minister in his own inimitable style put it ‘no teacher can come on any public school compound unless they are vaccinated and if they stay home, they won’t get paid so they have to be vaccinated…”

The Premier said while Nevis is not yet at that point, people should be responsible and do the right thing.

He hastened to clarify that mandatory vaccination does not mean that Nevisians will be forced to take the vaccines.

According to figures quoted by Premier Brantley, in the first 15 months of the pandemic, only 22 cases of COVID-19 were recorded on the island of Nevis.