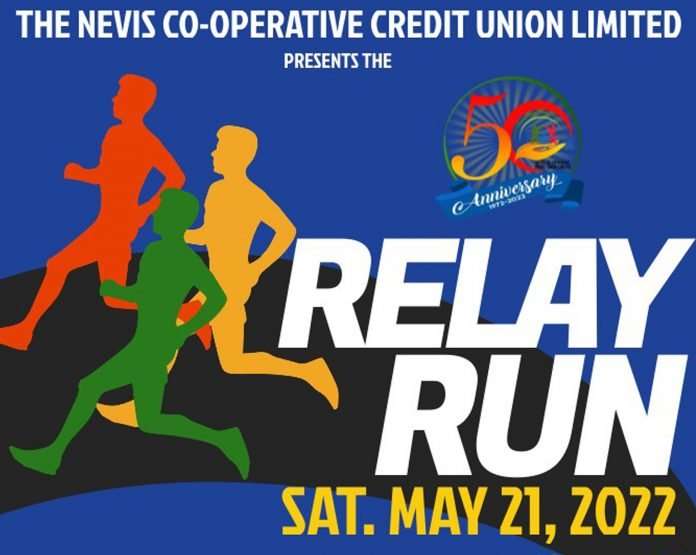 CHARLESTOWN, NEVIS, May 11, 2022 (MMS-SKN) — As part of its 50th anniversary celebrations, the oldest co-operative credit union in the Federation of St. Kitts and Nevis the Nevis Co-operative Credit Union (NCCU) Limited will hold a relay run on Saturday May 21 that will take participants from the Vance Amory International Airport in St. James Parish to the Villa Grounds in Charlestown

“Even as we celebrate this important milestone, what we are trying to do at the Nevis Co-operative Credit Union Limited is to encourage persons to be active, to exercise, and to stay active,” said Chairman of the 50th Anniversary Relay Run Subcommittee, Mr Kenroy Warner. “We recognise that good health habits are important if we are to move our nation forward, and exercising is one of the good healthy habits.”

The Nevis Co-operative Credit Union Limited, which was registered on July 25, 1972, is observing year-long anniversary celebrations under the theme ‘Consistency, financial Security & serving the community: 50 years of development and prosperity’.

Other members of the Relay Run Subcommittee are Secretary, Ms Tamara Johnson who is the Administrative Assistant Administration & HR; PRO, Ms Jaedee Caines who is the Business Development and Marketing Officer; Assistant Secretary, Ms Jahniel Nisbett who is a Credit Service Clerk; and members Mr Trevor Gill, the Information and Communication Technology Manager, and Mr Thorne Browne who is a Junior Operations Officer.

With six stations along the relay run route, each team will have six participants. It is an open race with no age or gender categories meaning that a team could have both male and female participants of all ages. Registration fee is $60 per team of six participants.

According to Mr Warner, who is NCCU’s Information Communication Technology Officer, registration closes on Friday May 13. Persons are encouraged to register by visiting the Nevis Co-operative Credit Union’s Facebook page, or calling at the office situated at the corner of Chapel Street and Featherbed Alley in Charlestown.

“We have a number of registered teams already and registration closes on the 13th of May – that is on Friday,” noted Mr Warner. “It is easy to register. You can check our Facebook page for the flyer which has a QR code which you can scan to register, or you can click on the link on our Facebook page to register. You can also register at the office – come in at the office, speak to myself Kenroy Warner or Ms Tamara Johnson and you get a registration form.”

Participants are expected to gather at their respective stations at 5:00 a.m. as the relay run will start at 5:30 a.m. The first station is the Vance W. Amory International Airport, followed in order by Oualie Beach Hotel, the bus stop at Sea Bridge Terminus, Five Turn-in in Cotton Ground, Jessups bus stop, and TDC Depot bus stop at Pinney’s and the relay will end at the Villa Grounds.

“We have snack boxes and each participant will get one when they get to the Villa Grounds,” pointed out Mr Warner. “The plan is to have a ‘cool-down’ at the Villa Grounds as well, so when it is all over, all the persons who would have taken part will just have a cool down session.”

According to Mr Warner, the local Red Cross branch will be on board to assist as well as the Police Department who would be assisting with the flow of traffic to give the participants an unhindered run on the busy island main road which will be used.

“The Ministry of Health, who through their Health Promotion Unit would have held a similar event in the past are giving us some support and guidance and assistance where we need,” said Mr Warner. “The Sports Department, and the Ministry of Social Development are also aware and they are giving us some assistance as well in terms of the use of the Villa Grounds, while the Nevis Television and Ms Judith Dasent will cover the event which will be helpful to persons following it on social media and mainstream media.”