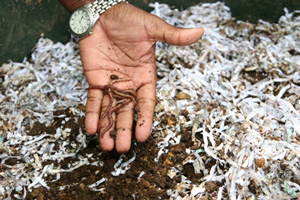 The Department of Agriculture on Nevis is determined to move forward with its thrust towards the use of vermiculture to maximise the benefits from organically produced foods and to ensure sustainability,  a simple technology anyone could adopt.

Director of Agriculture Dr. Kelvin Daly said the use of vermiculture or worm composting, once adapted, would mean savings on fertiliser and insecticides for farmers.

“It is a simple technology, the maintenance is minimal but the rewards are huge because you are doing an organic production. You are taking organic matter and breaking it down and reusing it, so the idea of recycling is heavy. All the paper from the household you use to take to the land field you can shred them and use them as bedding material, the kitchen scraps can be used rather than going to waste.

“Most persons have a garden whether it is a flower or vegetable garden which they can reuse the same products because it is 100 percent safe. There are no chemical or pesticides or herbicides in it and it is totally healthy,” he said.

Another benefit from vermiculture Dr. Daly contended would be savings on fertiliser. He explained that the worm compose had a dual effect. It had a very high nutritional value and it contained components which were alive that protected the plant against parasitic insects for example white flies. He added that once the plant was sprayed with the ‘worm tea’, a product derived from the worm compost, the insects would keep away from your plants.

“So you are saving on the insecticide and saving on fertiliser and you are getting a wholesome product,” he said and added that the compost would assist backyard organic farmers to continue to produce organic food without having to purchase expensive inputs from overseas.

Dr. Daly said the Department had launched worm composting during its Agriculture Open Day, 2007 last month and was pleased with the interest it had generated from Nevis and from their counterparts in St. Kitts.

He noted that the project would be expanded to the public till the end of July in order to increase the stock of the European Large Red Worms used in the process. He explained that the worms had been imported since the local earthworm proved ineffective in the process.

He also noted that the special bins used for the composting would have to be constructed to the specifications of the Department’s designs and that information would be disseminated by means of a workshop.

“We may have a workshop to deal with the construction of those bins. We want to get this project fully out there by July. We want to have farmers signed up as part of the project, give them a crash course in how to handle and feed the worms, how to harvest and use the material because a number of farmers have fertilising injectors already set up in their fields, so instead of using synthetic fertilisers you can simply use the compose,” he said.

Dr. Daly contends that Nevisians have become more sophisticated and have moved away from waste disposal through the use of pigs. He described the worm composting as a pig in the yard concept.

“We have moved away from simple things that make sense. Historically our grandparents used to mulch around the plants with twigs and leaves and would add animal manure as fertiliser and we have moved away from that because whatever seeds the animals (sheep, goats and cows) ate ended up in the garden and so persons became a bit put off by using the manure.

“With worm composting there are no seeds to cause a problem, everything is eaten by the animal and you would have no problem with it whatsoever,” he said.