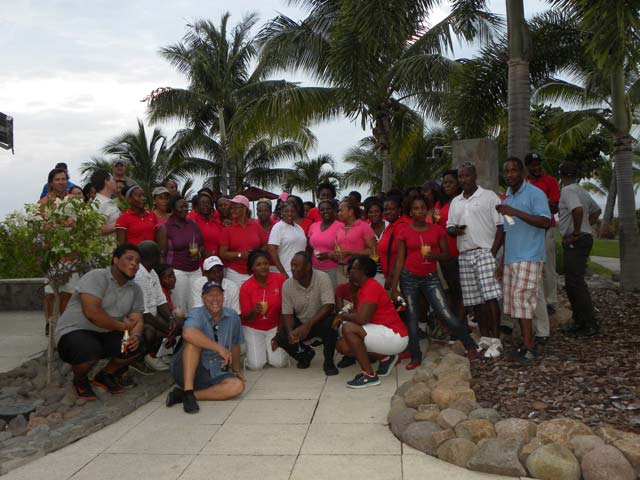 When more than 65 women in Nevis took part in the June 7, first International Women’s Golf Day, they went down in history as the only participants in the region to play. The inaugural event with the theme, “Engage, Empower,Support,” was held at the Four Seasons Resort.

Speaking with the Observer, Mackie France, Four Seasons Resort,Director of Recreation,explained why they signed on for the event.

“The movement started about two weeks ago. We received an invitation to take part in Women’s Golf Day along with 400 locations in more than 25 countries around the world,” France explained. “The goal was to introduce golfand empower girls and women to get into a sport that is traditionally reserved for men.”

France signed on immediately and contacted the Ministry of Social Development in getting women to register. Free registration was open to all women on the island. The Four Seasons, Nevis sponsored the activity.

“Today, Nevis women made history by adding the island of Nevis as part of some very important statistical data,” said Assistant Permanent Secretary in the Ministry of Social Development, Michele Liburd.

According to France,participants learned how to hold a golf club, swinging techniques, what equipment is called and golfing terms.

“It was not a lot of time to get more than 65 people introduced to the game of golf, but it was a start,” France said. “Our intention was to play nine holes of golf in a format called a scramble. But, I think most golfers only completed seven to eight holes.”

After the round of golf, the women were invited to socialize, network and talk about the event. Plans to hold a future women’s golf reception were discussed.Participants were encouraged to continue playing golf and participate in monthly golf clinics hosted by the Four Seasons Resort.

“We want everybody to take part,” France explained. “If anyone didn’t get a chance to come today, theyare welcome to come back for monthly golf clinics.  We want to make golf attractive to women.We want to create an environment in which they can come once-a-month to the Four Seasons for a complimentary golf clinic with a golf instructor.We will encourage them to go on the course and put into practice what they learned from the instructor. So there is a lesson and a follow-up where they practice what they have learned.”

In addition,each participant received a $25 golf voucher, which can be used at the pro-shop to purchases golfing equipment or gear.France said golf is an expensive sport, but the resort has reduced its rates to accommodate locals.