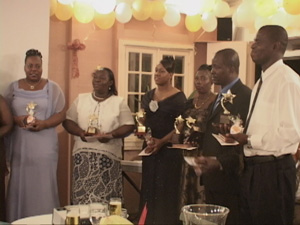 Principal Education Officer in Nevis Mrs. Jennifer Hodge described teaching as a form of higher calling and a public service which ultimately shaped the community it served. She made the comment at the second annual Extra Mile Teacher Recognition Award, hosted by the Department of Education on November 17, 2007, at the Old Manor Hotel in Gingerland.

She said while the constant alterations in structures, policies and programmes provided the framework for a sound forward-looking system, the ultimate progress in education was dependent on teachers.

“The demand on today’s teachers from government, parents, employers and society at large is overwhelming. Rapid economic development has resulted in startling social transformations this makes the teacher‚ role as moral and social anchors even more critical,” she said.

Mrs. Hodge who initiated the award programme, admonished the teachers present to be good examples of citizenship, since their actions would later be instrumental in shaping the future of the society in which they served.

“Teachers, students will probably forget 95 percent of the information taught but indelibly etched in their memory will be that particular teacher who took an interest in and believed in them,” she said.

The principal education officer said too often the efforts of the teacher had gone unheeded and it was for that reason the Department of Education had embarked on an award initiative for teachers who had excelled on Nevis.

“The Department of Education in its effort to promote quality teachers and with the full support of the Ministry and Nevis Island Administration (NIA), initiated the Extra Mile Teacher Recognition Award. This award is open to all teachers at all levels: preschool, primary and secondary public and private,” she said.

Mrs. Hodge further noted that the teacher who exhibited outstanding levels of commitment, exemplary performance and voluntary extra guidance to students and teachers alike qualified for the award.

Nomination from the 14 schools on Nevis provided for the input of students, parents and faculty in the selection of the deserving teacher.

The 2007 awardees included two teachers who were nominated in 2006: Mr. David Grant of the Gingerland Secondary School and Ms. Latoya Jeffers of the Charlestown Primary School which Mrs. Hodge said was an indication that it was limitless the number of times a teacher could be awarded.

While Mrs. Hodge congratulated the awardees, she said to be a good teacher was no easy feat.

“It takes hard work! Managing a class takes time and skill. The teacher has to make important and often difficult decisions on a daily basis: how to communicate, react to challenge, inspire a student, intervene in a conflict and the list goes on.”

“Not all teachers are the same and before us we have a sample of those who are indefinitely patient, the beginning teacher who inspires his colleagues, those who are dedicated ˆ putting in more than is requires and the firm ones that help the wayward student to find his way in life. Good teachers all who strive to improve the quality of learning and help to shape lives,” she said.

In Mrs. Hodge’s view, committed teachers took the time to mentor and build relationships with students and encouraged them to stretch intellectually and validated them.

She said she was hopeful, that the awardees would play a leading role in the growth of teaching excellence in their respective schools through mentorship and to share good teaching practices with their fellow teachers.