Saturday the 24th May was a good day for Nevis, but it was a great day for Kristina Stoney – it was her birthday as well as the day she showed the whole of the Caribbean that she is a force to be reckoned with in the sport of triathlon.

This event was hosted by Jason Gooding and the Rainbow Warriors Triathlon Club, now in its 3rd year the Rainbow Cup is one of the region’s top triathlon events that attracts some of the best athletes.

Three times OECS Champion Reggie Douglas accompanied Kristina and federation president Winston Crooke to the beautiful island of Tobago to compete in this annual event that also featured Trinidad National Champion Ancil Greene, OECS Female Champion Clare Morrall, and the winner of the recent Grenada triathlon David Hay of Trinidad . The race format was a little different this year to accommodate both Olympic and Sprint distance athletes, the course consisted of a 1000 mtr Swim, 30 km Bike, 7 km Run, the race organization was first class and the sponsors clearly evident in their support.

The race started off the beach with athletes having to complete two laps, exiting the water after the first lap before continuing for the second, much like the Elite race format, Reggie had a good swim, completing the course in 18:27, but still leaving him in 6th place out of the water, he had a lot of work to do. For Kristina the swim was proving a serious challenge, coming in behind Winston on the first lap, however with Winston pacing her she pulled a little back on the other women, but still 5 minutes back from Clare with a finish time of 23:09, Kristina really had a lot to do.

The bike leg has always been the Nevis team strong point and so it was on this day, each loop of the 4 lap bike course saw both Reggie and Kristina easing up to the competitors ahead of them, both athletes were focused on the task ahead, looking neither left nor right as the ate up the kilometers of this very technical bike course. Reggie finally passed the last rider ahead of him on the third lap, it was David hay of Trinidad, whilst Kristina had to wait until the fourth lap to finally get past the 6 women ahead of her, it was going to come down to the run, could they maintain their dominant positions.

Reggie was in and out of transition in a flash and off and running, unaware of the abilities of the young guns coming up behind, he had to push out hard and maintain his lead, for Kristina, a slightly different  scenario, as she had recently beaten Clare in Grenada and knew she could outrun her. However the other females were an unknown quantity, and as they say “it aint over till its over”.

Like the best of movie endings this was a classic, Reggie holding off the chasing pack to take one of his sweetest victories, crossing the finish line with the St Kitts & Nevis flag held proudly aloft in 1:40:52, followed by the very fast Trinidadians Clarence Thomas and David Hay. Then followed the women led by the sweetly smiling Kristina who had fought back from 22nd place after the swim to win the race in 1:59:12, and on her birthday no less, she was followed by Clare Morall and Valerie Shoppell of St Croix.

Both athletes received the congratulations from the attending crowd, the sponsors, and other competitiors, and Kristina got the special treat of everyone singing ‘Happy B’day’ 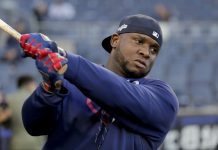 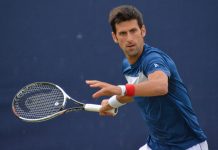