The Nevis Water Department in a release advised customers that disconnections will be conducted throughout the island of Nevis commencing the month of June, 2021.

“Customers who are in arrears for more than 90 days are encouraged to settle their outstanding amounts on their water bills before the stated date to avoid disconnection of service(s). We look forward to your kind co-operation and understanding during this time.”

In January Premier of Nevis Mark Brantley urged individuals and businesses in Nevis that have racked up thousands of dollars for unpaid water to pay up to avoid disconnection.

Brantley revealed that some companies and individuals have large, unpaid water bills of up to $30,000.

Brantley said that that the water department will begin disconnection of delinquent customers shortly.

When questioned by the Observer as to why customers were allowed to be indebted to the
water department without disconnection, Brantley said he doesn’t know.

“I am not sure that we have a satisfactory answer, but it happened, and I am saying that it
has to stop. Whatever the reasons were that some people were able to rack up large bills in
terms of water and electricity without being disconnected, we are now saying to these
people, you have had a free ride for long enough. Come in now and make an arrangement
to pay your bill. If you can’t pay in full, pay in part.” 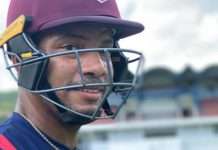