by Joseph Choi#
The Hill

The Biden administration has gone all in on the COVID-19 antiviral Paxlovid, announcing new measures to make the oral treatment more widely available and making it clear that Vice President Harris used it as she recovered from the coronavirus.

The White House has said it will nearly double the amount of Paxlovid available around the country and that it is working to set up more Test-to-Treat locations in pharmacies and other locations.

But the administration faces a number of obstacles in really making Paxlovid, and a similar treatment from Merck and Ridgeback known as molnupiravir, easily accessible to Americans.

Former Surgeon General Jerome Adams even made note of the difficulty people have had in acquiring antivirals on Monday, sharing a thread on Twitter about the many steps one COVID-19 advocate had to go through to get Paxlovid for her eligible child.

He said he hoped the media and White House would share the thread and then ask “how many poor, elderly, vulnerable people have the time, patience, resources, and know how” to get the treatment.

When antivirals were authorized late last year, the short supply of the medicines was initially the main challenge in getting them to patients. Right before the White House’s expansion plan was announced, a senior administration official said about 100,000 courses of Paxlovid would be made available through pharmacies specifically.

Health care experts who spoke with The Hill said the expansion plan failed to account for the difficulty that many patients face in actually acquiring a prescriptions for the oral drugs.

Tom Kraus, vice president of government relations at the American Society of Health-System Pharmacists, said the plan was an “important step” but that many people aren’t able to walk into a pharmacy, get tested for COVID-19 and receive a prescription for Paxlovid on the same day.

“They still can’t walk in and get tested and get treated. They have to still go to a physician in general to get a prescription for the drug, which I think is kind of inconsistent with what a lot of people understood test and treat to mean,” Kraus said.

The Department of Health and Human Services last year authorized licensed pharmacists to order and administer COVID-19 treatments like monoclonal antibodies. However, pharmacists were excluded from the Food and Drug Administration’s (FDA) authorization of Paxlovid late last year.

Health care providers who are authorized to prescribe Paxlovid — physicians and advanced practice nurses — are not always staffed at pharmacies. Kraus said this situation will be “operationally quite challenging” to the administration’s goal of expanding Test to Treat locations.

“Test to Treat is centered on drugstores where they have these kind of Minute Clinics or these urgent care clinics, but those types of clinics are not in every drugstore. But what is in every drugstore is pharmacists,” said Amesh Adalja, senior scholar at the Johns Hopkins University Center for Health Security.

Health and Human Services did not immediately respond when asked about the possibility of amending the authorization to include pharmacists.

Paxlovid must be administered within just a few days of the onset of COVID-19 symptoms, making the hurdles that people go through to get a prescription even more pertinent. Pfizer’s study on Paxlovid involved participants starting a course of the oral treatment within three and five days of symptom onset.

Adalja said this constrained time frame, along with a lack of public awareness and difficulty in locating the drugs, is currently the biggest obstacles to providing them to patients. Because Paxlovid is not fully approved by the FDA, drug companies are prohibited from advertising it, contributing to low awareness and understanding of the drug.

“Like it or not, the fact of the matter for the way the system works in the U.S. is a lot of education about drugs gets done by drug manufacturers, and they’re sort of constrained in how much they can do that for these drugs because they’re authorized under an [emergency use authorization],” said Kraus.

The Biden administration’s plan seeks to address this lack of awareness, with the White House saying it would give providers “more guidance and tools to understand and prescribe treatments” as well as communicate to the American people the wide availability of antivirals.

However, some providers are also reluctant to issue prescriptions for Paxlovid in part because of their knowledge on the drug.

“Some of the major issues are just, I would say, clinician discomfort with prescribing because it’s a drug that actually has a lot of drug interactions,” said Tara Vijayan, a physician who works in the infectious diseases division at the David Geffen School of Medicine at the University of California, Los Angeles.

A senior administration official said last week that “provider engagement” was critical for Test to Treat to work.

“We really want them to know that full range of the existing eligibility and make sure that they’re connecting patients to these lifesaving therapeutics,” the official said.

Patients who are at a high risk of developing severe COVID-19 may have health conditions that require them to take other medications, which have to be taken into account by their providers when considering a round of Paxlovid, considerations that Vijayan noted are the expertise of pharmacists.

Paxlovid is meant to be administered shortly after a COVID-19 infection as a way of reducing a person’s chances of hospitalization and death. As cases have risen in recent weeks due to the BA.2 variant, hospitalizations and deaths have remained low overall, thanks in part to the high percentage of people who are either vaccinated or have had a prior infection.

Despite this divergence in trends, antivirals are still relevant and important at this stage in the pandemic, health experts said.

Vijayan opined that they should still be reserved for people who are unvaccinated and those who are at the highest risk of hospitalization due to COVID-19. While vaccines have been shown to provide a strong protection against hospitalizations and death, Adalja said the risk can always still be lowered. 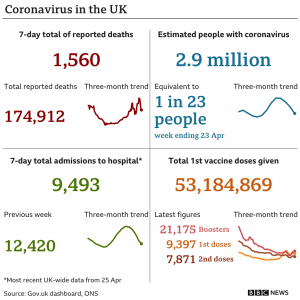 COVID worsens asthma in children; booster after infection not as beneficial vs Omicron 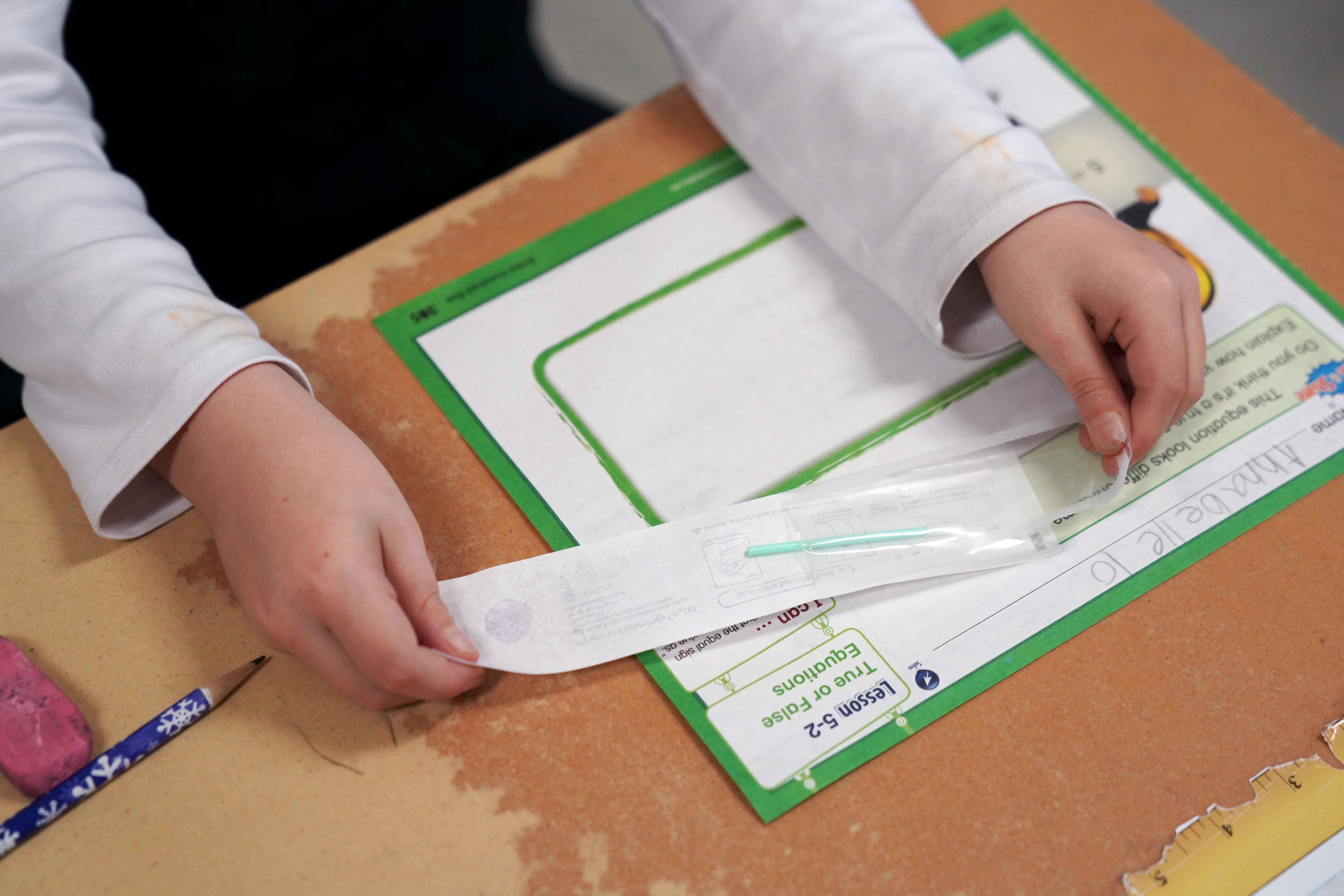 A child opens a testing swab at her desk so she can swab and test herself for COVID-19 to prevent the spread of coronavirus disease (COVID-19) in the classroom at South Boston Catholic Academy in Boston, Massachusetts, U.S., January 28, 2021. REUTERS/Allison Dinner

May 2 (Reuters) – The following is a summary of some recent studies on COVID-19. They include research that warrants further study to corroborate the findings and that has yet to be certified by peer review.

Asthma in children may worsen after an infection with the coronavirus, doctors warn.

They studied nearly 62,000 U.S. children with asthma who had PCR tests for the virus in the first year of the pandemic, including more than 7,700 who tested positive. Infected children had significantly more asthma visits, hospitalizations, emergency inhaler use, and steroid treatments during the six months after their illness compared to children who tested negative and to their own prior history, researchers reported in the Journal of Allergy and Clinical Immunology: In Practice. Children who tested negative for the virus “had improved asthma control for the next six months, meaning fewer emergency department visits and hospitalizations for asthma, and less asthma treatment,” said Dr. Christine Chou of Children’s Health of Orange County, in California.

Results of earlier studies showing improvement in asthma control in the early part of the pandemic were likely due to public health measures like staying home and masking, which curbed exposure to asthma triggers, she said. Despite the overall impression that children with asthma did well during the first year of the pandemic, Chou added, the new study shows “longer lasting harm of COVID on children’s asthma control.”

Among people who were previously infected with the coronavirus, a third dose of an mRNA vaccine from Pfizer (PFE.N)/BioNTech (22UAy.DE) or Moderna (MRNA.O) may not boost their protection against the Omicron variant of the virus, according to new data.

Researchers studied nearly 130,000 people tested for COVID in Connecticut from November 2021 through January 2022, including 10,676 with Omicron infections. Roughly 6% to 8% had been infected with previous versions of the coronavirus, according to a report posted on medRxiv ahead of peer review. Two doses of an mRNA vaccine did help protect against Omicron among people with prior infections, but “we did not detect an additional benefit of receiving a third booster dose among this population,” said Margaret Lind of Yale University.

A separate study from Canada, also posted on medRxiv ahead of peer review, similarly found that more than two vaccine doses “may be of marginal incremental value” for protecting previously-infected individuals against Omicron. The message, Lind said, “should be that (1) people should get two doses of mRNA vaccine regardless of if they have had a prior infection or not, that (2) people without prior infections should get a booster dose and that (3) people with prior infections should consider a booster dose, especially if they are in a high risk group for life threatening complications, but recognize that it may not provide significant additional protection against infection above two doses.”

Click for a Reuters graphic on vaccines in development.