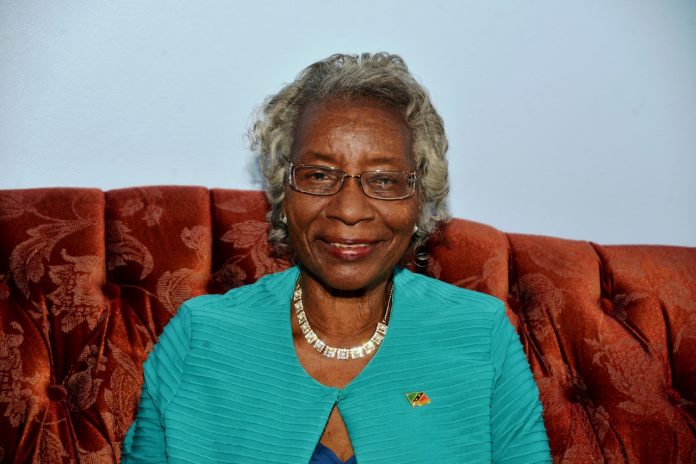 The new health centre on Station Street in Tabernacle Village will be commissioned and renamed in honour of former Matron Nurse Mrs. Sylvia Garnette, MH.

Mrs. Sylvia Mary Agatha Garnette, née Parris, who in 2016 received the Medal of Honour (MH) for Nursing from the Federation of St. Kitts and Nevis, was born in Tabernacle on October 5th, 1929.

The only child of her mother, a young Sylvia had a formative experience that was the springboard for her interest in pursuing a nursing career; Sylvia’s mother lost her sight when her daughter was between the ages of four and five years old.

In 1954, Miss Sylvia Parris travelled to England to study and train in General Nursing at the High Wycombe War Memorial Hospital in Buckinghamshire and later in Midwifery at Leicester General Hospital.

Miss Sylvia Parris married Mr. Charles S.M. Garnette of Tabernacle Village on July 27th, 1960 and started a private midwifery practice in St. Kitts six years later.  In 1967, the Government employed Mrs. Garnette as District Midwife for the Tabernacle area, but she often served other areas such as Saddlers, Parson’s Ground and Mansion.

Between 1969 and 1971, Sylvia Garnette pursued studies in Gynecology and Obstetrics at Beth Israel Hospital in Newark, New Jersey, USA, where she obtained post-graduate certification in Obstetric Nursing.

Upon returning to St. Kitts in 1971, Mrs. Garnette served in various capacities of substantial responsibility: District Nurse Midwife; Public Health Nurse at the health centre in Cayon Village, where she was instrumental in the setting up and opening of the Cayon Day Care Centre; Family Planning Administrator; Assistant Matron at the Joseph N. France (JNF) General Hospital, and in 1987 she was promoted to the post of Matron at JNF.

A year later, she obtained a certificate in Public Administration from the University of the West Indies in Jamaica.

Matron Garnette was instrumental to the introduction of the statute that made the full immunization of children prior to their admission to the school in St. Kitts and Nevis mandatory by law.

In 1993, Mrs. Sylvia Garnette retired from public service in St. Kitts and Nevis.  She resides in Florida, USA.