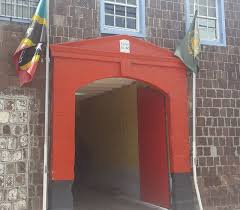 Basseterre, St. Kitts – The planned construction of a new prison on St. Kitts will improve the government’s ability to implement certain rehabilitation programmes for inmates, improve overall security amongst prisoners and possibly avoid a similar incident that occurred in Guyana earlier this week.

In February, the prime minister and minister of national security, Dr. Timothy Harris, announced that the government had allocated more than $2 million for the design and tender process for the construction of a new prison in St. Kitts. “I am pleased to report that in 2017, we have made provision for significant work on the new correctional facility to be built in Estridge, so we have provided $2 million plus for the design of this facility,” said Harris.

In an interview with the Observer on Monday, Permanent Secretary Osmond Petty of the Ministry of National Security stated that the construction is still in its design stage and a recent meeting with the architects allowed a look at a preliminary design.

“We are looking somewhere around November to have final drawings done,” Petty said. “After that, we will be looking at securing funding and tendering.”

Petty admitted not having enough details surrounding the Guyana incident, but speculated that the incident may have been started due, in part, to overcrowding.

“I have not had an in-depth report as to what is the cause and I will assume that it has to do with overcrowding and the lack of facilities and maybe lack of security for prisoners because prisoners should not be able to get access to inflammatory material,” he said.

Petty also spoke to the security measures now being implemented at the current Her Majesty’s Prison Facility.

“We have been doing that all along as we stand right now, we have a full body scanner that should be on its way shortly and we have put CCTV coverage all over the prison,” he said. “Every section of the prison is under full CCTV surveillance. Nobody can enter the prison without being searched properly, but we continue to face challenges with occasionally finding contraband, but that is why we need the scanner.”

According to reports in Guyana, prisoners set three fires in the country’s main prison facility, which resulted in it burning to the ground and killing a prison officer. According to reports, the fires were set in an effort to create a diversion to allow multiple inmate to escape the facility. The fire caused the prisoners to be housed in a building that is home to the Prison Officers’ Sports Club a few yards away. It is also reported that up to a half dozen prisoners are on the run following the fire.

The Her Majesty’s Prison in Basseterre currently houses 183 people, according reports earlier this year, and the facility was only designed to house 60.