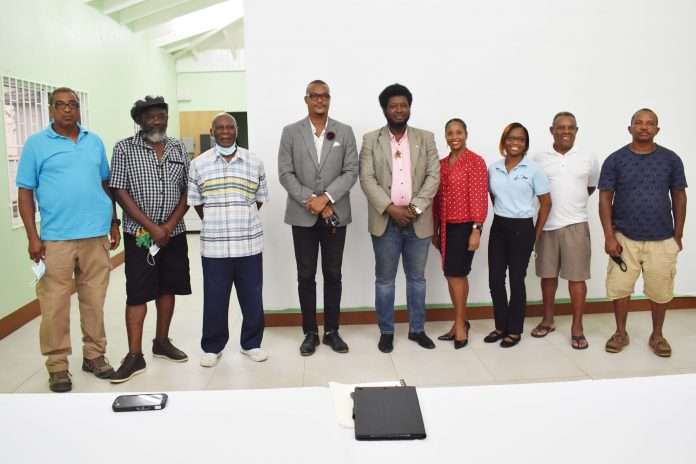 BASSETERRE, ST. KITTS, September 9, 2021 (MMS-SKN) — Federation’s oldest fishermen cooperative society and the largest based on membership, the Newtown Fishermen Cooperative Society Limited, recently held its annual general meeting at the Department of Fisheries on Newtown Bay Road, and the new Executive Board was inducted at a press conference held at the same venue on Wednesday September 8.

At the meeting which was attended by officials from the Ministry of Cooperatives and Environment, and the Ministry of Agriculture, Fisheries and Marine Resources, President of the new Executive Board, Mr Craig Tuckett, informed that attempts had been made to revitalise and to restructure the cooperative society over the past year, and he thanked the hard work of the Department of Cooperatives.

“It is with that hard work that we saw our AGM being concluded last week Thursday the 2nd of September, right here at the Department of Fisheries and we elected a new Executive Board and a new Supervisory Committee,” said Mr Tuckett.

He added: “According to the Cooperative Act that we are managed under, and according to the regulations, after that AGM the Board and the Supervisory Committee are to meet with themselves to decide who will be the various officers and the duration of their terms. We are here to announce, to you the good people of St. Kitts and Nevis, who those persons are.”

Secretary Mr Damion Jacobs, who was not present, will be serving for two years.

“We will endeavour to do what we can for the development of this very important institution in our community,” said President, Mr Craig Tuckett. “We will endeavour to reach out to the young people, and show them that indeed becoming a fisher is a lucrative business and while at the same time it helps with nation building and diversifying our economy.”

Members of the Supervisory Committee were introduced by their chairman, Mr Wycliffe John, who will be serving for a period of three years. He informed the meeting: “We are here to work, and we are prepared to work together.”

Giving remarks at the press conference were Permanent Secretary in the Ministry of Cooperatives and Environment Ms Sharon Rattan, a representative of the Permanent Secretary in the Ministry of Agriculture, Fisheries and Marine Resources, Ms Maritza Queeley, and Area Parliamentary Representative the Hon Dr Geoffrey Hanley. Also giving remarks, via telephone, was the immediate past Area Parliamentary Representative Ambassador His Excellency Ian Patches Liburd.

Also present were Registrar of Cooperatives Mr Clyde Thompson, and his deputy Mrs Earla Allen who opened the press conference with a word of prayer, and the Cooperatives Officer attached to the Newtown Fishermen Cooperative Society Limited, Ms Tracy Ann Gaskin.

Treasurer Mr Frank Farrell, who gave the vote of thanks, took the opportunity to thank all the fishermen who have become members of the Newtown Fishermen Cooperative Society Limited. He added: “I would like some more fishermen to join the co-op, so if you are listening please come and join, and we will try to look after you.”