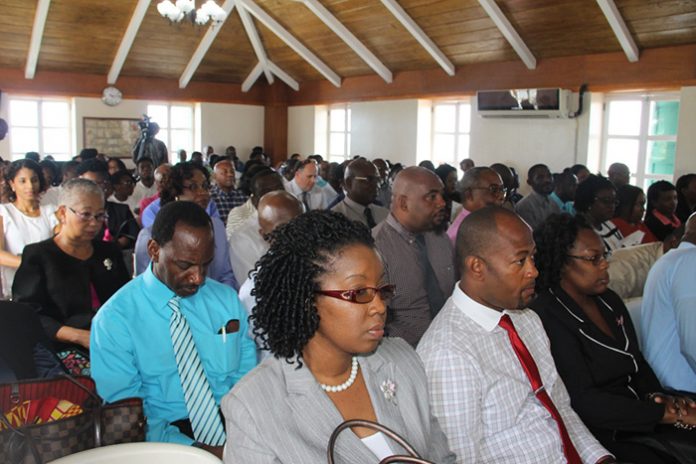 A $227 million budget has been announced for the 2018 fiscal year in Nevis with just about $29 million (13 percent) being allocated to the Ministry of Education and Health.

The budget address was delivered by the Premier of Nevis and Minister in charge of Finance Hon Mark Brantley. The $227.30 million budget represents a decrease of 3.8 percent over the 2017 budget of $236.30 million.

The Ministry of Health and Gender Affairs is allocated funding in the amount of   $ 28.9 million representing 13.0 percent of the total budget. Included in this amount are funds allocated for providing improvements in the quality and delivery of Health Care along with construction work under the Alexandra Hospital Expansion Program,

The Office of the Premier is allocated funding in the amount of $ 9.6 million representing four percent of the total budget. Included in this amount are funds allocated for the reconstruction of the Newcastle Police Station and the construction of operating space for our CCTV operations as we seek to put the safety and security of our people on the forefront of my Government’s agenda.

The larger amount of the budget goes to the Ministry of Finance which will receive $ 82.30 million representing 36.0 percent of the total budget. Included in this amount are funds allocated for our Debt Servicing obligations along with funding to execute continued works on the Treasury Building Reconstruction Project and construction of the Water Taxi Pier.

Fifteen percent of the budget goes the Ministry of Communications and Works, which has been allocated funding in the amount of $ 35 million. Included in this amount are funds allocated for our infrastructure development program including road work for Brown Hill and Craddock Road along with the completion of the CDB Water Enhancement Program and the drilling of three additional new wells.

“My Administration is projecting to collect the amount of $137.92 million in Recurrent Revenue, a slight decrease of 2.0 percent when compared to fiscal year 2017. This downward revision in our projection is as a result of the slowdown in our CBI sales market thus forcing us to be conservative in our projection for expected revenue inflows from property transfers.

“In addition, we expect to collect the amount of $30.0 million from the Federal Government, being our 20 percent fair share of revenues from passport processing fees under the CBI program. Our combined total Recurrent Revenue is therefore projected at $ 167.92 million for this fiscal year,” Brantley said.

In continuing Brantley said that when compared to projected Recurrent Expenditure of $ 162.61 million, “This provides a surplus on the recurrent budget of $ 5.31 million which will be utilized to provide part funding for our capital expenditure program.”

“Funding for our capital expenditure program will also be comprised of loan disbursements from the Caribbean Development Bank for the Water Enhancement project along with committed disbursements from the Sugar Industry Diversification Fund (SIDF).  In addition, my Administration will seek loan funding from other local entities at concessionary rates not exceeding 4.0 percent per annum to complete the funding for these programs.”

Projected revenues for 2018 are estimated at $201.31 million compared to $140 million last year. This amount includes Current Revenue of $ 137.92 million, Recurrent Grant from CBI program of $30.0 million, CDB loans and other Concessionary Loans of $21.90 million and Sugar Industry Diversification Foundation SIDF Grant Funding and other Grant Funding of $ 11.49 million.