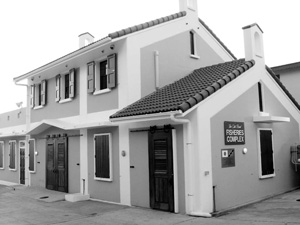 Minister of Agriculture, Lands and Fisheries, Hon. Cedric Liburd announced that his ministry does not wish to see fish being sold at the side of the road anymore.

“The ministry has provided complexes to improve the phytosanitary and sanitary conditions in the handling, processing and selling of fish throughout the island,” he said.

Liburd said that he hoped the people of Old Road and its surrounding villages would fully utilize the recently opened fishery facility.

The facility was officially opened last week Wednesday in the presence of the Prime Minister Hon. Denzil Douglas, Ambassador John Liu of the Taiwanese Embassy, other dignitaries and many fishermen from the nearby communities.

Liburd said that the opening of the Old Road Fisheries Complex marked the start of a new level of improvement in the social and economic conditions of the people of Old Road and its surrounding village.

“I implore you to fully utilize the facility as it was constructed for your benefit. This is the beginning of higher education in fishing practices for the fishers of this community. We hope to see an improvement in the community’s feed security, food safety and livelihood patter in the fishing business,” he said.

Minister Liburd said that his ministry realized that the future of fisheries development in the area would be greatly improved if the fishers in Old Road had the necessary tools.

“The fishers could only see improvement in their in business if they obtained the necessary tools for the exploitation of under utilized fisheries resources and if they were provided with the infrastructure for marketing, processing and boat repairs. This would enable the sustainable use of all marine resources. The initial proposal of a jetty in Old Road to assist the fishers was revisited as Hon. Rupert Herbert felt that his constituency deserved more than a mere jetty. That is how this facility came about,” he said.

Liburd explained that the facility was not just a building and jetty, it would provide fishers with greater opportunities and avenues to expand in a very lucrative industry.

“Local fishermen have a golden opportunity to develop themselves and help reduce the large importation of fish into the Federation. This project will upgrade the handling, marketing and distribution of fish within Old Road as we want to ensure fish is bought, sold and stored in sanitary conditions,” he noted.

Funding for the over 5 million US dollar complex was provided by the governments of St. Kitts and Japan and is the second such complex, the first being the Basseterre Fisheries Complex.

Liburd urged the community to protect the facility and to use it wisely so that they could enjoy an abundance of benefits.